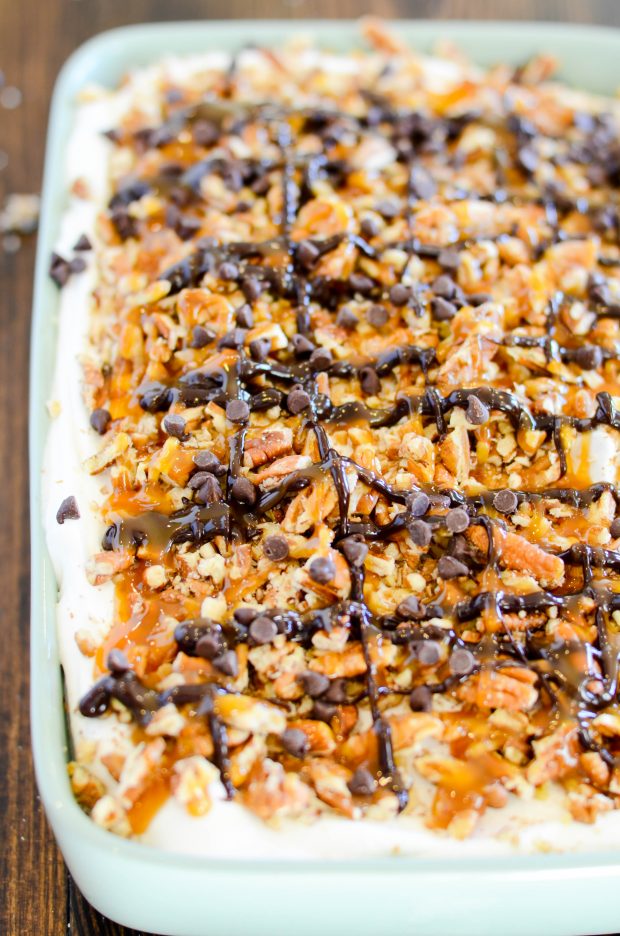 I wasn't originally planning on sharing this cake today. In fact, I've got some Hot Fudge Swirled Red Velvet Brownies in my drafts that are going to knock your socks off next week. My mom says they're the best dessert I've ever made.

But after just one bite of this poke cake… I knew she was wrong. This site has well over 1,000 dessert recipes in its archives. And I know I have lots and lots of favorite recipes. But I have to say, this might just be the best thing I've ever made. 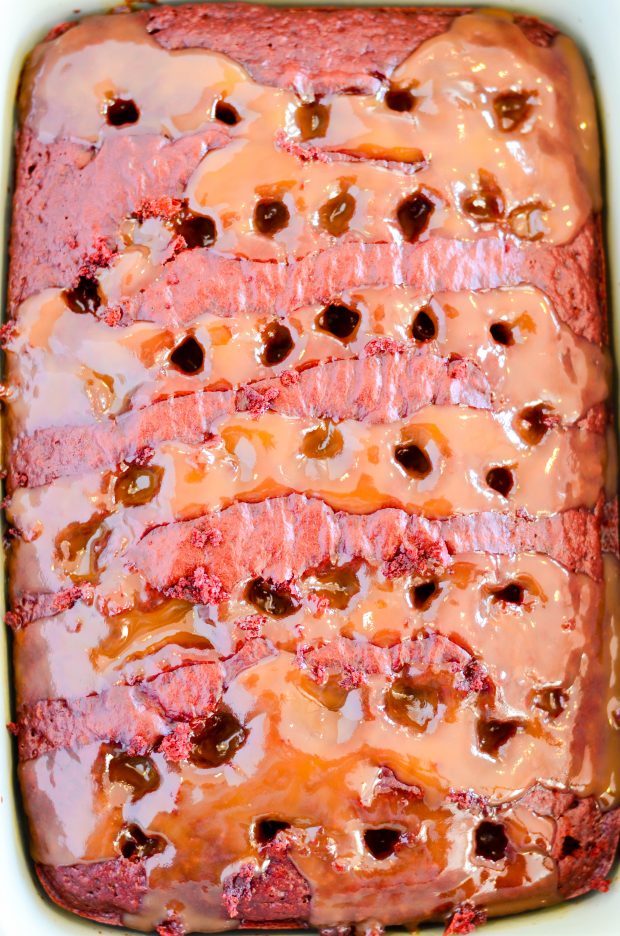 Yeah, you could probably say things were a little out of control there for a while. But who's complaining ?????!

Ok. So, let's talk logistics for a sec. I get LOTSSSSSSSSSSSSS of questions about poking the holes in the top of the cake. ☝???? That's what it looks like! I just take the bottom of a wooden mixing spoon and poke holes all over the place.

Next, the caramel. I used Smuckers Caramel Sundae Sauce in the squeeze bottle. I love using the bottle, because it makes it so much easier to aim for the holes! You want to get the caramel inside the cake as much as possible. That's where the magic happens. 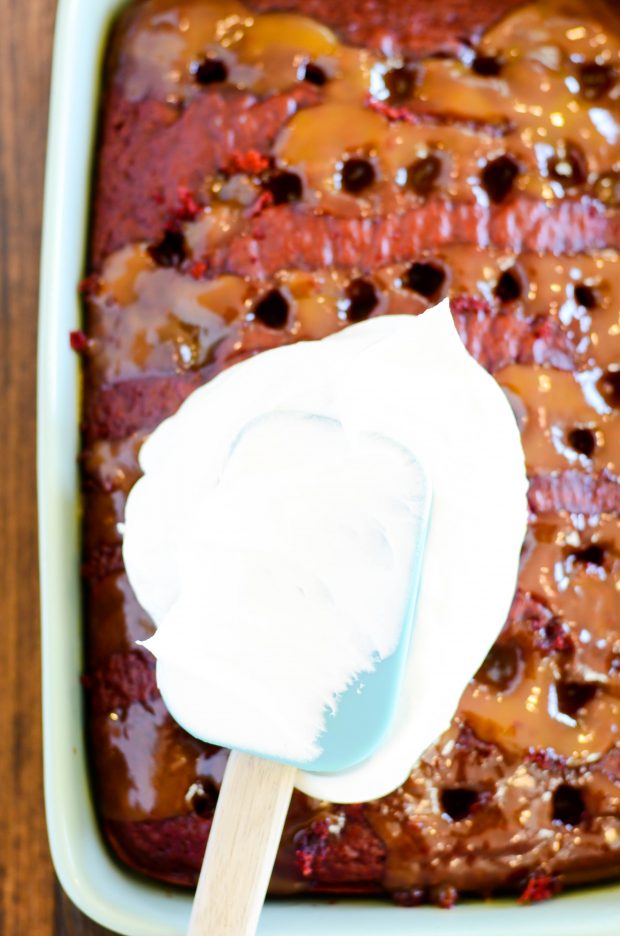 Next up, the Cool Whip!! You'll use a whole 8 ounce container to spread over the cake. And honestly, you could up that if you wanted to, depending on how thick you want the topping to be. Don't let me stop you!

I highly recommend using Cool Whip. But I always get asked if you can use homemade whipped cream. Basically, the answer is no. It just doesn't work since this cake needs to chill for a while. However, I do have a recipe for homemade Cool Whip that will work if you want to go that route. 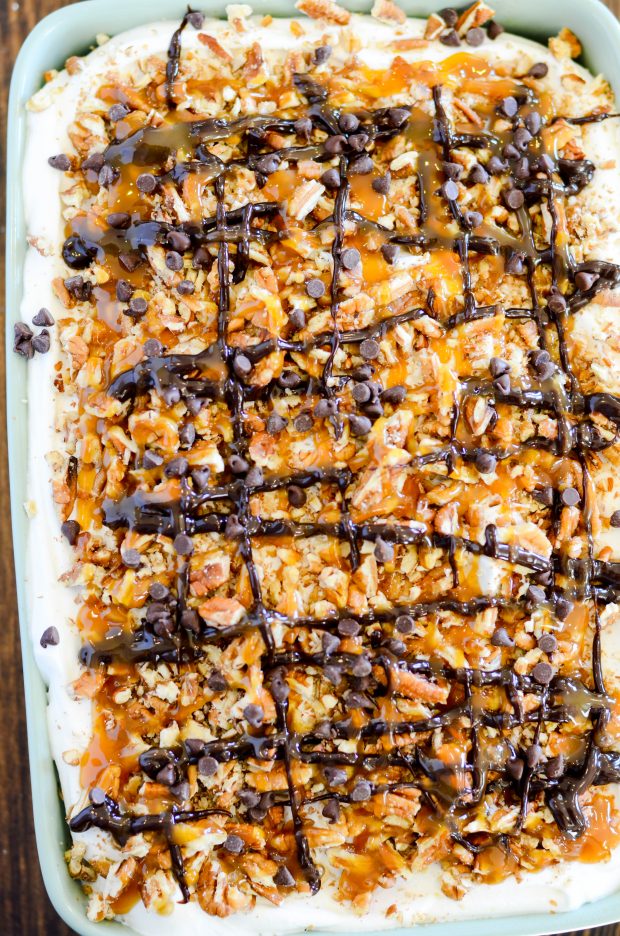 Now it's time to make it pretty AND add irresistable texture by covering the top of this bad boy in chopped pecans, mini chocolate chips, hot fudge sauce, and more caramel!! It's insane. And just so, so very right. 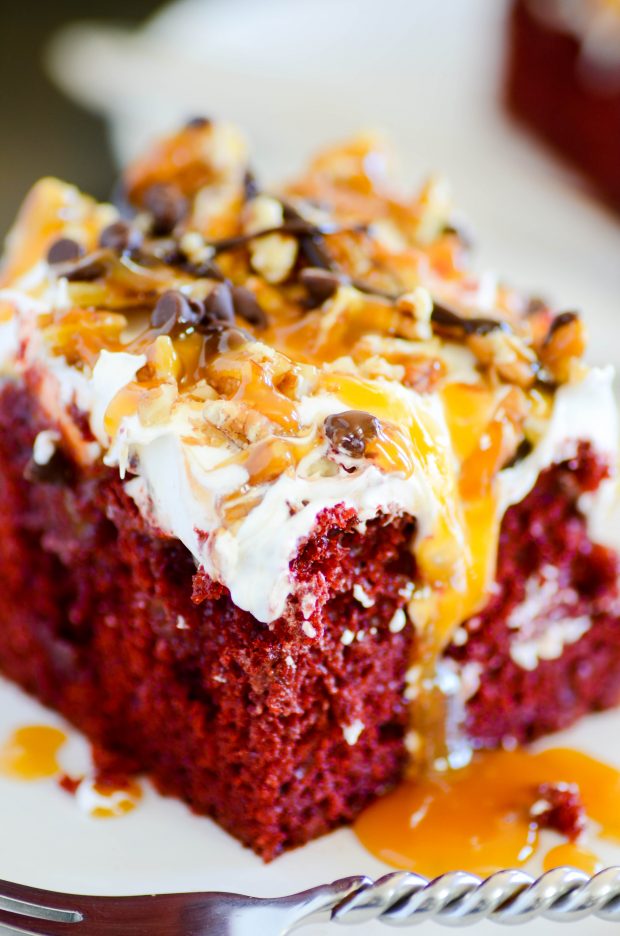 Would you just look at that?!

After I took the photos, I ate one large piece for lunch and then marched the rest of this dish down to my neighbor. Because I most definitely did not trust myself with that cake. Willpower launched itself out the window and didn't look back. I'm telling you– make this cake! But make it responsibly… with lots and lots of other eaters around.

Poke holes all over the warm cake using the bottom of a wooden mixing spoon (see photos in post).

Pour most of the caramel sauce over the cake, aiming for the holes. Reserve some sauce for drizzling over the top of the cake. Let chill for at least an hour.

Spread the Cool Whip over the top of the cake. Top with the pecans, chocolate chips, caramel sauce, and hot fudge drizzle. Chill for at least 3 more hours before cutting and serving.