This is the original BTS or Poke Cake Recipe (as I know it). There are a lot of different versions out there, but this is the classic one for me. Chocolate cake, poked to death, soaked in sweetened condensed milk, and topped with copious amounts of Cool Whip, Heath Toffee Bits, and caramel sundae sauce.

I've also included a few of my favorite variations at the bottom of the post! 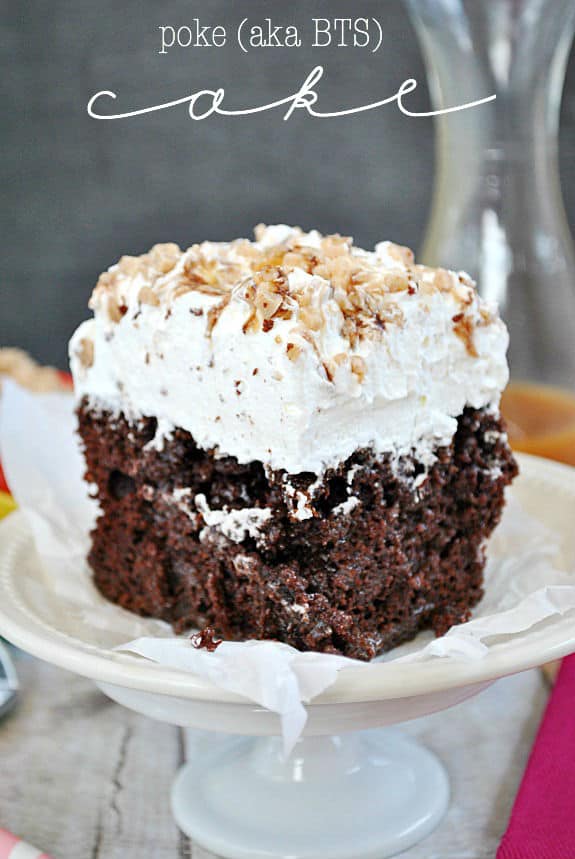 This is the original recipe that began my ongoing love affair with poke cakes and their many, many recipe variations.

Poke Cake is something my Grandma makes every once in a while for family affairs (although usually in trifle form), and I'm always sure to snag a piece. But the funny thing is, other than those occasional run ins with this cake, I never really gave it much thought. I mean, I've always loved it. It's always been delicious, and lovely, and and I could never get enough.

But it never once crossed my mind in all of my years of poke-cake-eating that it could be done differently. 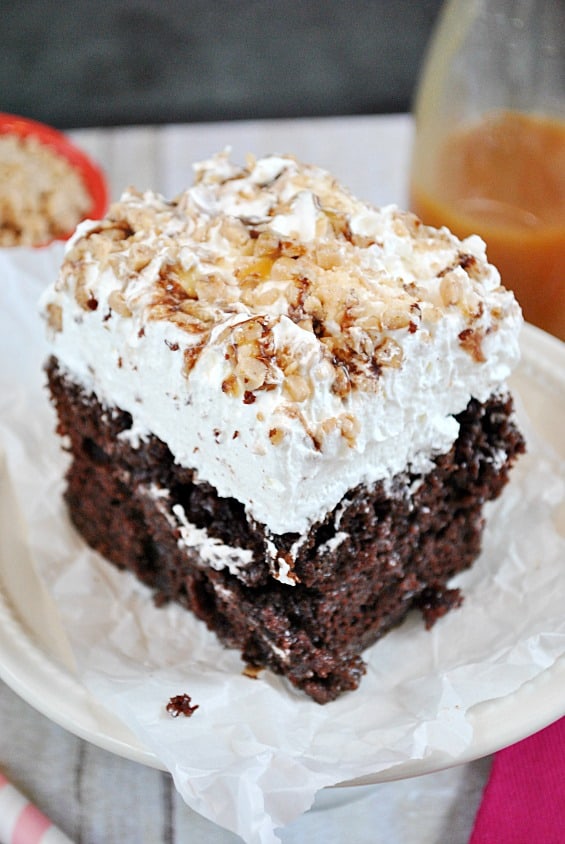 October-November was sort of a turning point for me in my recipe development methods. Up until then, I had simply been trying to come up with the most creative recipes I could concoct. But around that time, I was slowly shifting towards more traditional recipes with subtle variations and twists.

And I thought… how could I change this recipe?

The obvious place to start was to exchange cake flavors. And because it was Fall time, and because pumpkin paired nicely with the Heath and caramel already in the recipe, I made a Pumpkin Poke Cake. The only difference between that cake and the original was the exchange of pumpkin cake for the chocolate cake. Easy. 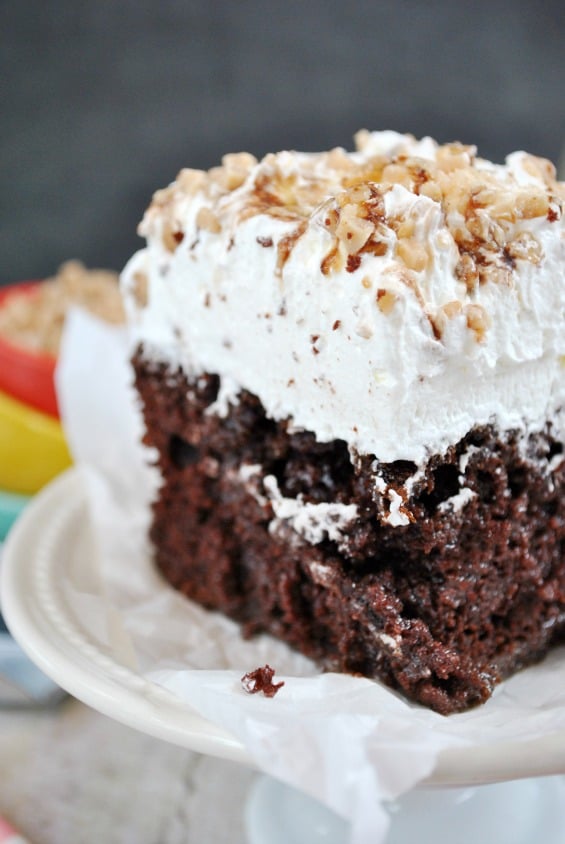 And then that cake went crazy viral on Pinterest, Stumble, and Facebook. So I thought… I guess I'd better make another!

With Christmas just around the corner, I decided to make a Chocolate Peppermint Poke Cake. This time I played around with the sweetened condensed milk filling by blending it with a little bit of peppermint creamer. It made the cake a little moister than the original, but I loved it. In fact, I prefer it that way!

That Christmas cake was also the first time I experimented with adding a layer of hot fudge sauce, Oreo pieces, and new toppings. Hands down one of my favorite variations. LOVE IT. 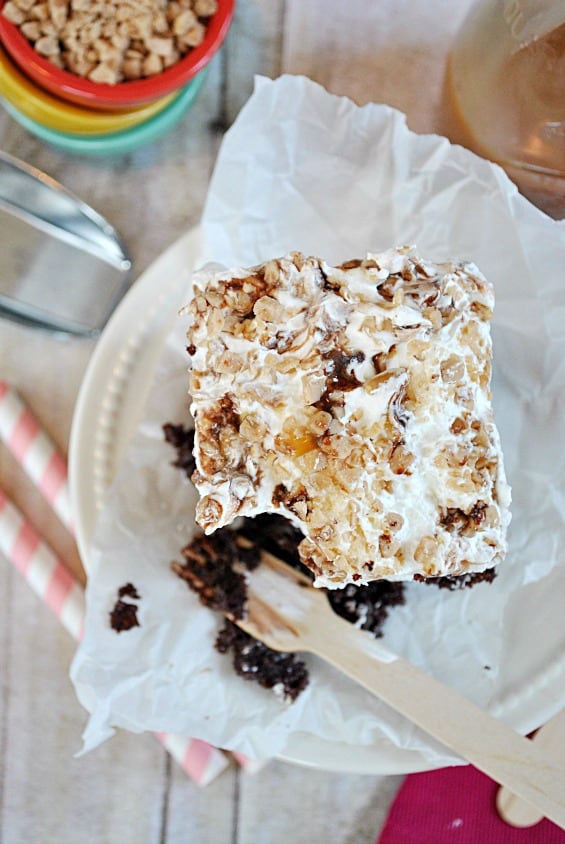 As the months have passed, I've continued to experiment with new flavors for different holidays (see Valentine's Red Velvet, Easter Carrot Cake, and Summer Lemon Cake). I had a lot of fun creating a rainbow colored cake for St. Patrick's day. And I've even made a skinny version!

There are sooooo many ways you can play with this little ol' recipe. It's really such a fun one to change up!

And, it seems, the more Poke Cakes I make, the more questions I get about them. I've been shocked at how many people know so little about this cake! So in the spirit of sharing and hoping to make everyone as addicted to this recipe as I am, I thought I'd answer a few of the questions I regularly get asked… Just so we're all on the same page here.

What is a poke cake?

It's a normal cake (baked from a mix or from scratch) with holes poked in the top (either with a fork or the base of a wooden spoon). Sweetened condensed milk, pudding, or jello is then poured over the holes, which allows the liquid to seep into the cake and make it moist and flavorful. After the cake has chilled for a few hours and the liquid has been absorbed into the cake, it is topped with Cool Whip and other optional toppings (like Heath Bits).

It's basically the same thing. Except, to my understanding, BTS cake refers only to the version in this post: chocolate with Heath Bits and Caramel. BTS stands for “better than sex.” You'll have to be the judge of that!

I don't understand the names of your poke cakes.

I know. So sorry about that. I'm a horrible recipe namer. I saw that my friend Nikki over at Chef in Training had named her BTS cake “Better Than Anything” cake. So I've been trying to play off of that title by replacing the “anything” with another word. Like the Christmas Poke Cake was called, “Better than… Christmas Poke Cake.” I always try to keep “Poke Cake” in the title as well, since different people seem to know it as “better than… cake” and “poke cake.” Basically I wanted everyone to understand what I meant, so I made it too long. Which actually confused everyone instead. My bad.

How many holes do I poke?

For heaven's sake poke as many as you'd like! But for those of you who need an actual number… 24 big holes (using the base of a wooden spoon, not a fork) seems to do the trick…

It's too sweet, too moist. Is that normal?

Do I add the cool whip before or after chilling?

You can add the cool whip at any time after the cake is completely cooled and the sweetened condensed milk has been poured. However, it is a little easier after the cake has had time to absorb the sweetened condensed milk. But if you're in a hurry to have it all done and in the fridge, go ahead and spread it on right away. In the end, it'll be just fine.

Hope that helps! And I hope you enjoy this cake as much as I do!!

When I made this cake for photographing, I was out of Heath Milk Chocolate Candy Bits, so I used Heath Bit O' Brickle Bits and drizzled some chocolate syrup. This works just fine, but if you can find the Milk Chocolate Heath bits-- use those!

Don't miss a bite! Connect with Something Swanky:

Looking for more Poke Cakes? Here are some of the ones mentioned in this post: 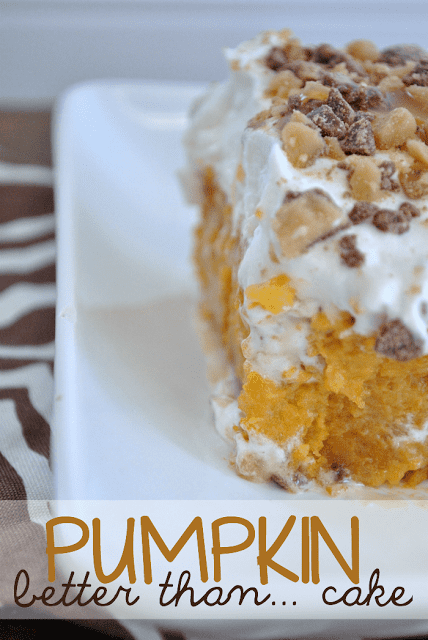 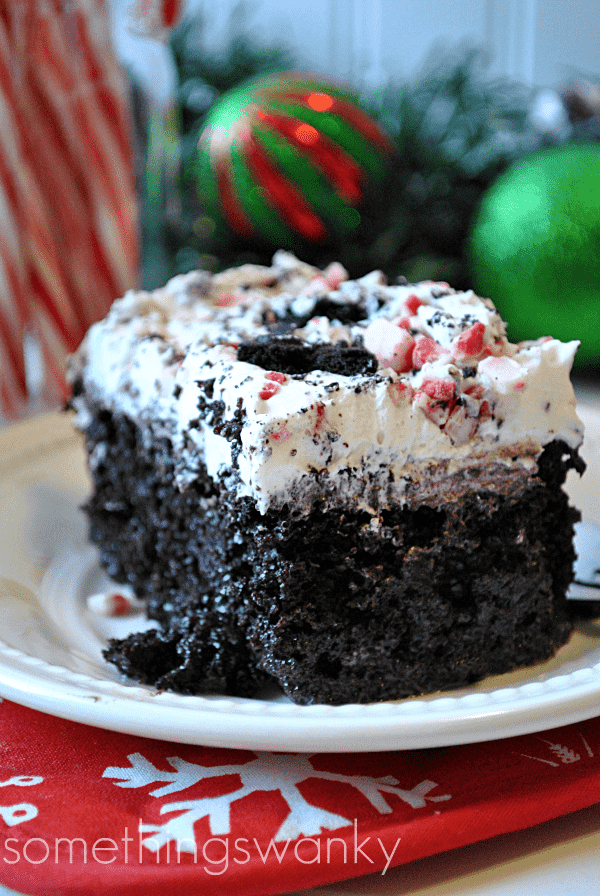 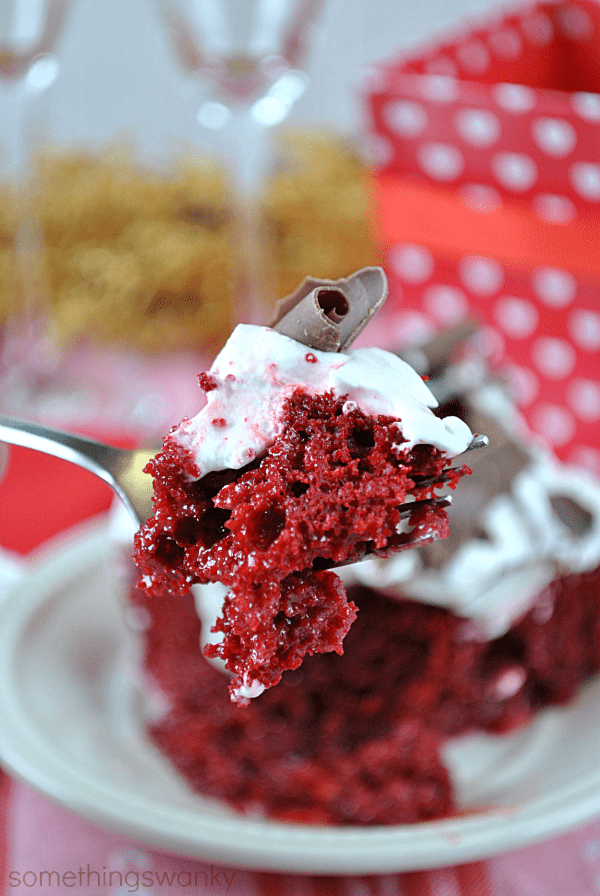 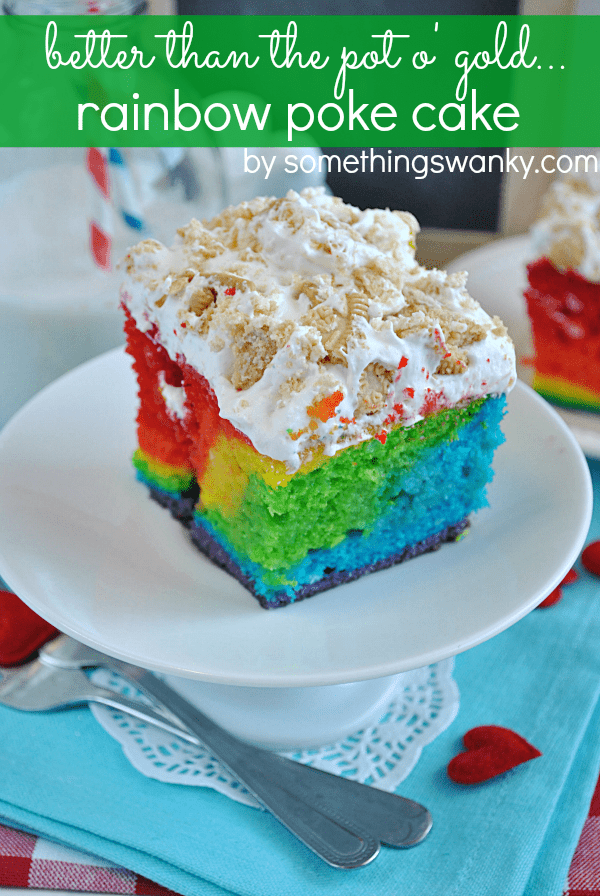 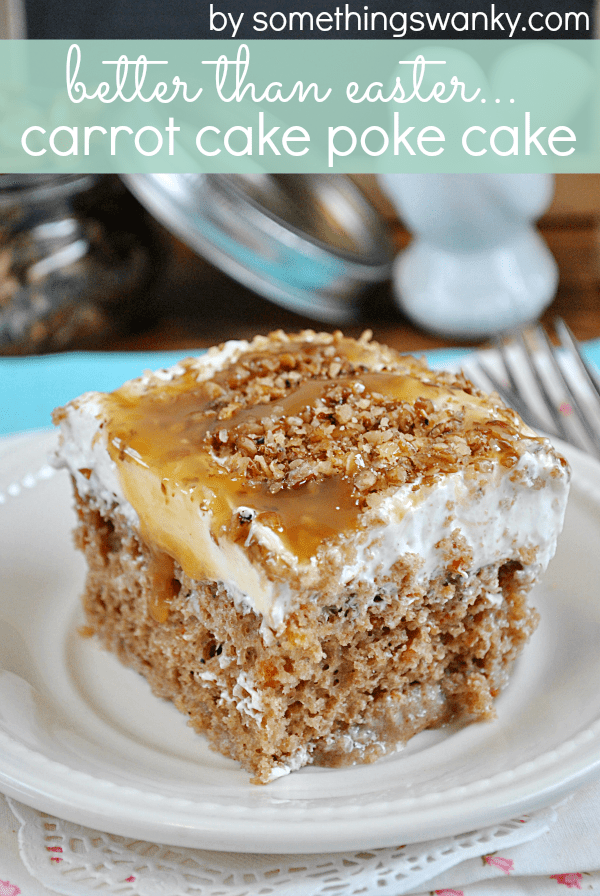 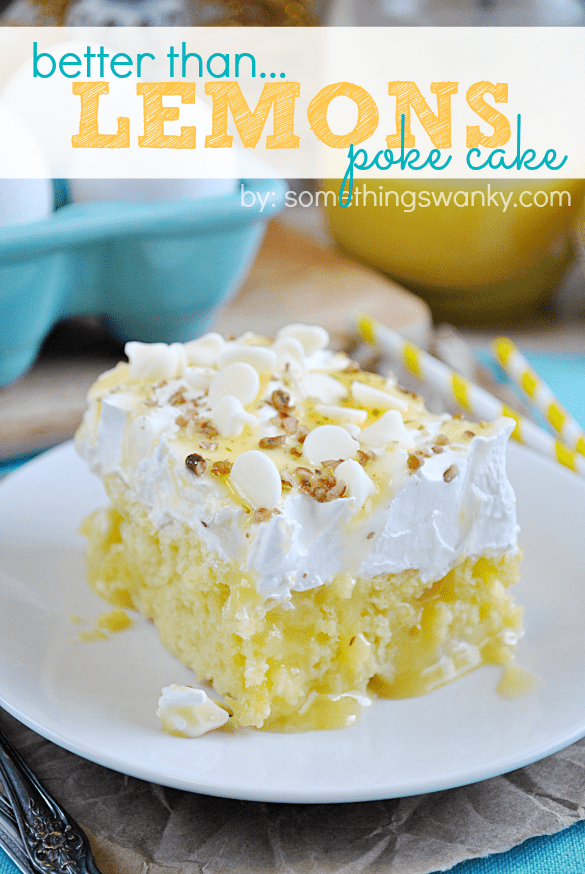 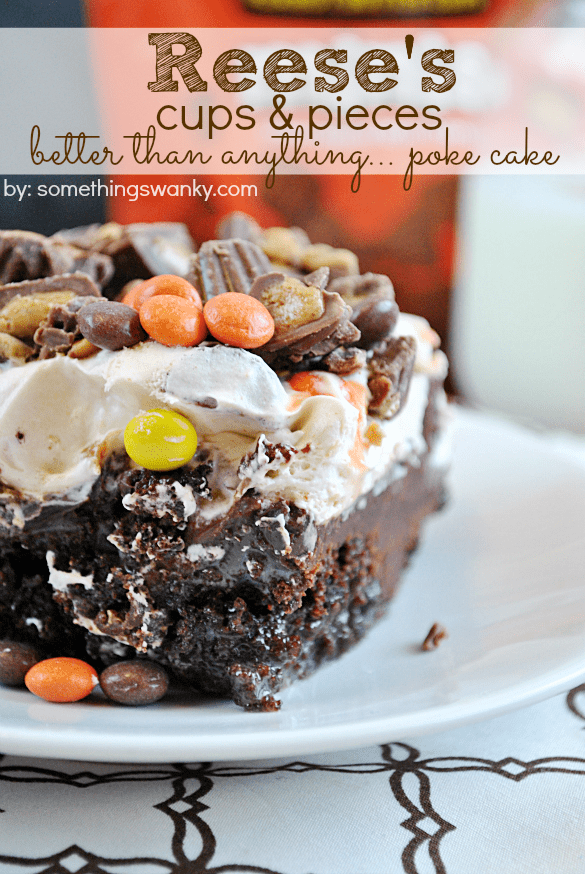 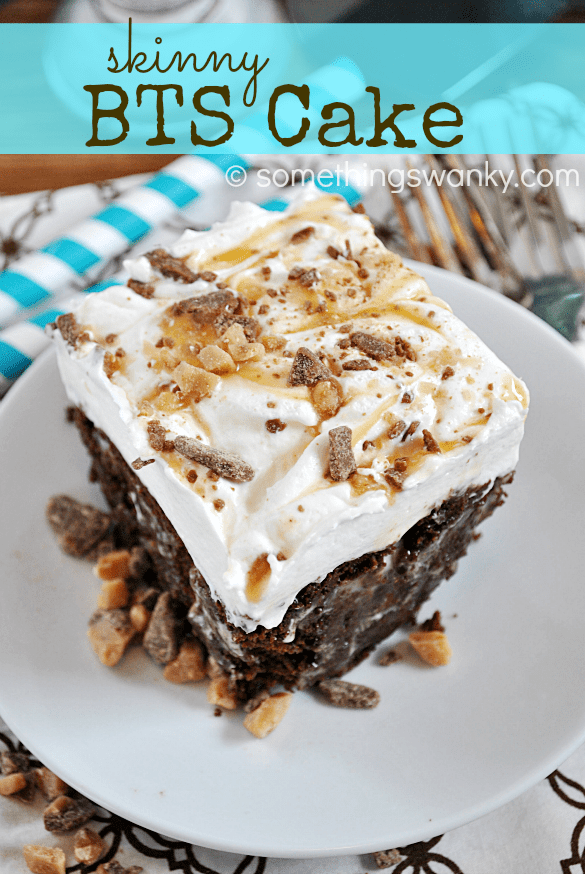