This simple recipe for homemade bread dough is a much used family favorite! And it can be used for much more than just loaves of bread– try this as your base for cinnamon rolls, dinner rolls, pizza crust, doughnuts, and more! 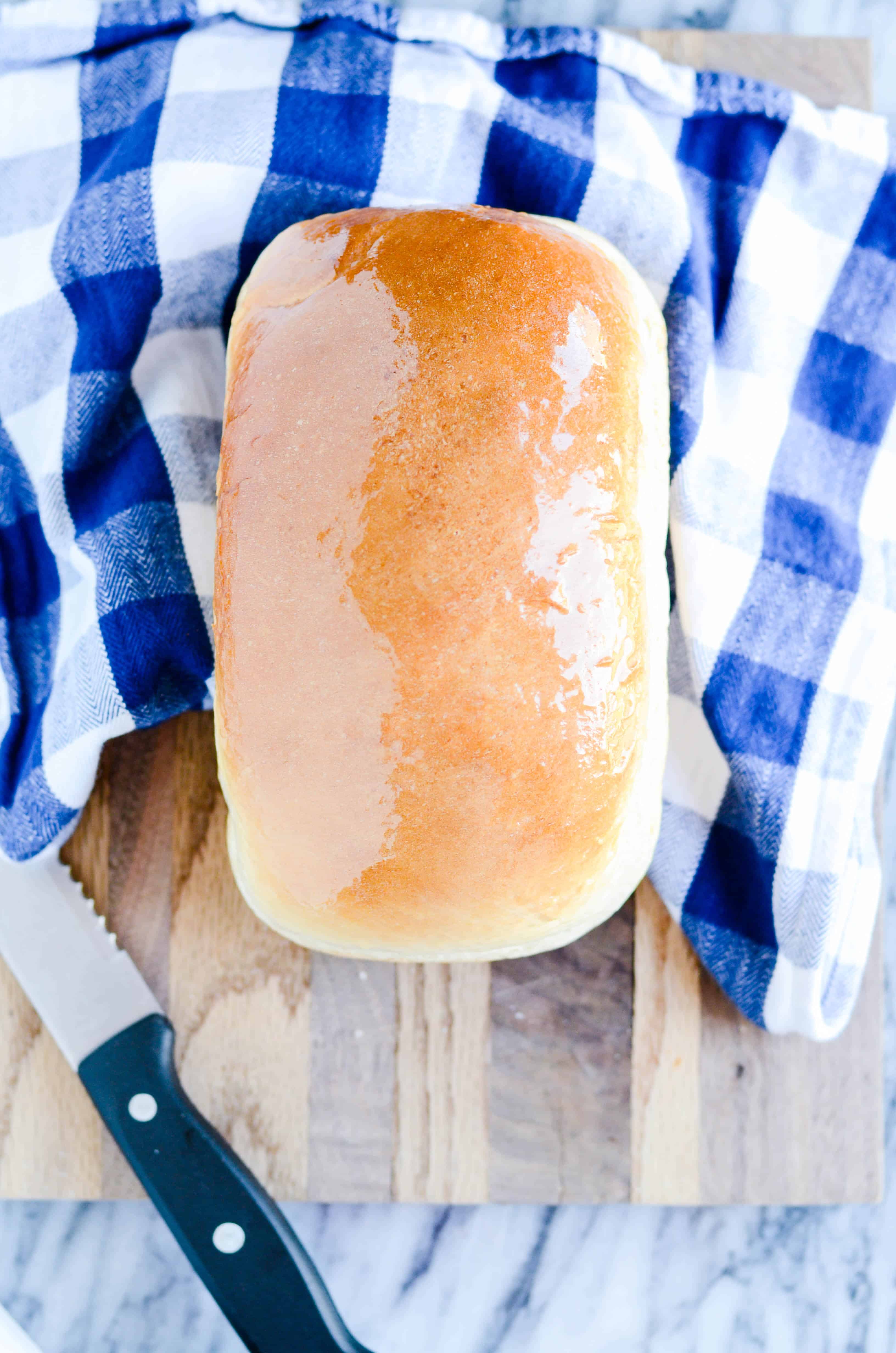 I came to a startling realization over the weekend: I've been writing Something Swanky for almost 4 years, and have never posted many of the recipes most used in my home on a daily basis! I'm always so busy trying to bake up the “next big thing,” that I rarely step back to share some of the basic recipes that have been so foundational to all of the other recipes on this blog.

So I asked around a bit on Facebook, and after getting the green light from many of you, I've decided to spend the next few weeks or so posting my most loved basic recipes that I use all the time in my own kitchen for my family and friends.

I thought this bread would be a great place to start, because I use this dough for so many uses in my cooking and baking. Most often (besides baking bread), I use it for pizza crusts, cinnamon rolls, doughnuts, and dinner pockets. But more on that at the end! I'll tell you all about the different recipes I've used it for and suggest some fun variations. Read on!

I don't do much step-by-step here, but for some of these basic recipes I will. Just because I really want you to understand some of the key (simple) principles that lead to a recipe's success.

The most important part about making any bread is in the yeast and how the dough rises. I've found that proofing my yeast has made all the difference in the world (and trust me, I've had my share of bread failures before I started doing it this way)! Proofing involves dissolving the yeast with sugar and sometimes oil (although this recipe doesn't call for any oil).

Start by sprinkling 2 tablespoons of yeast over 2 1/2 cups of warm water– think of warm bath water, and it should be about perfect. I like to proof the yeast in a 4-cup measuring cup. It make it easier to measure out the honey… which is coming next. 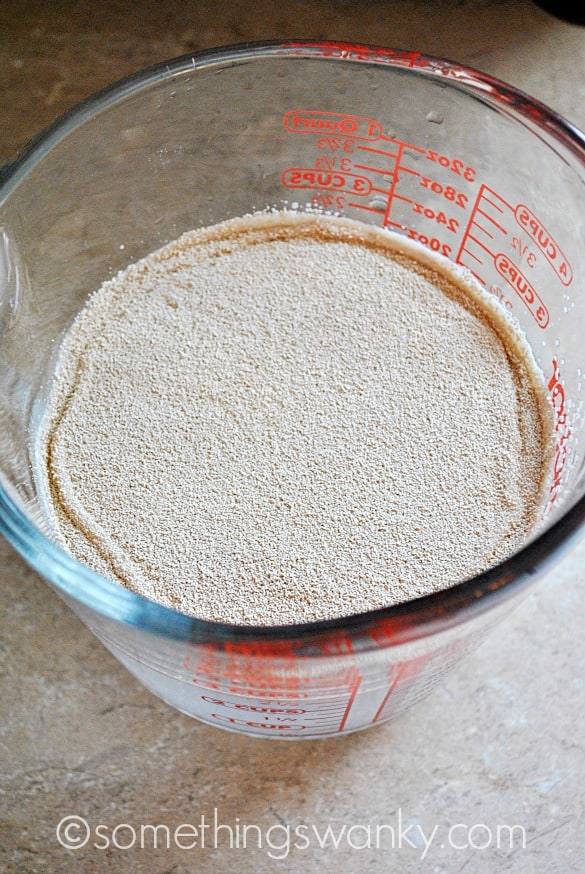 Drizzle the honey over the yeast until the water level reaches the 3 cup mark (a cheat to measuring the honey without the hassle of measuring it in a separate cup). This will gently push the yeast below the water, aiding in its activation. 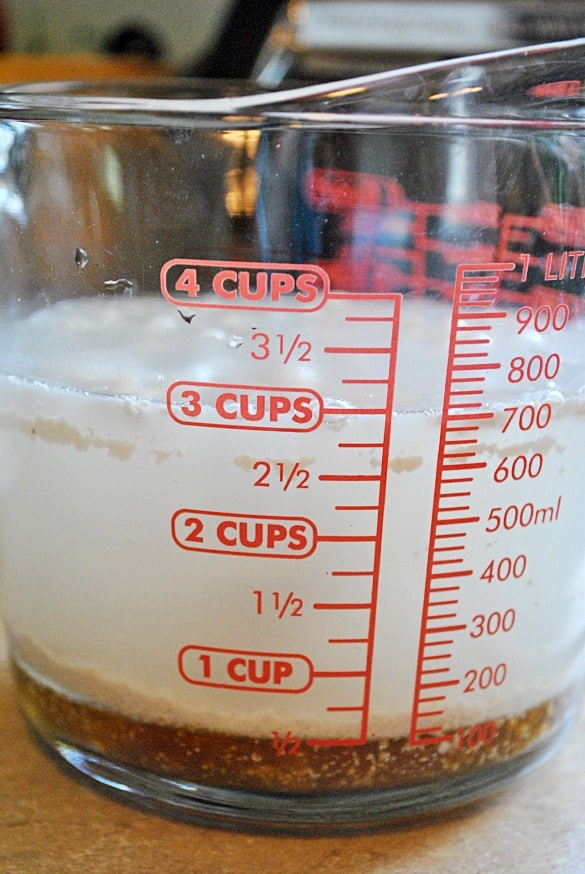 Let the yeast rest for about 5 minutes. You can go ahead and get the rest of the ingredients together in your stand mixer while you're waiting. You'll know it's ready when everything looks nice and foamy. Like this: 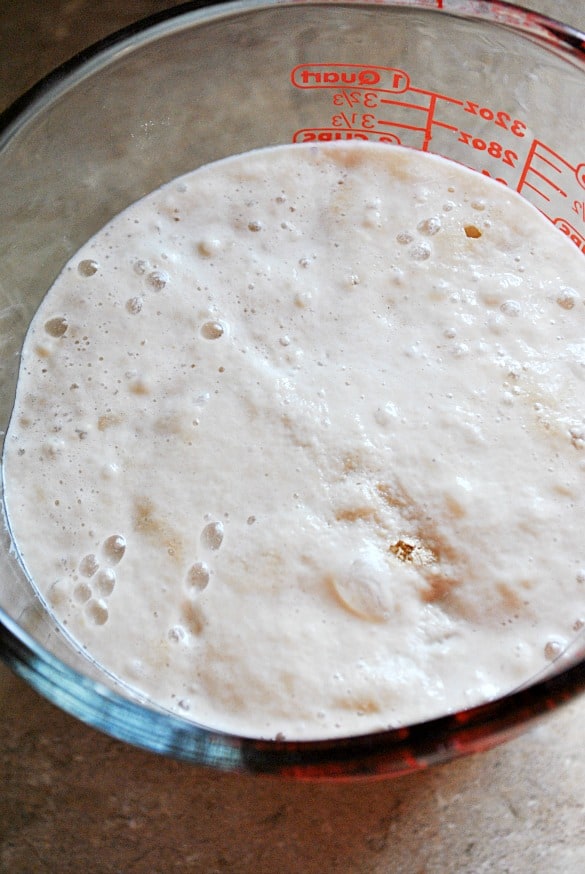 Pour the yeast water into the stand mixer with the flour, salt, and dry milk (you'll have to scrape to get all of the honey out). Attach the bread hook and knead until dough starts to form, and then another 6 minutes beyond that. You can also do this part with a wooden spoon and your hands, but I really love using my stand mixer for this.

I usually stop kneading when the dough looks like this: 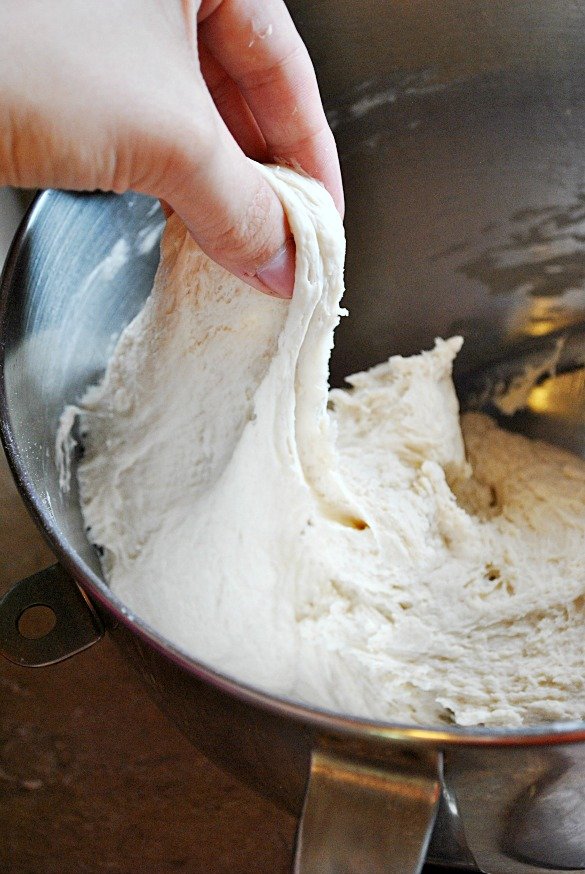 Use well floured hands (and sometimes a pinch or two of flour into the bowl if you feel like the dough is still too sticky) and work the dough into a ball. Lift the dough and give it a quick spray of non-stick cooking spray underneath and around the sides of the bowl. Replace the dough, cover with plastic wrap or a towel, and let rise in a warm place (like the stove top over the pre-heating oven) until doubled in size. It should look something like this: 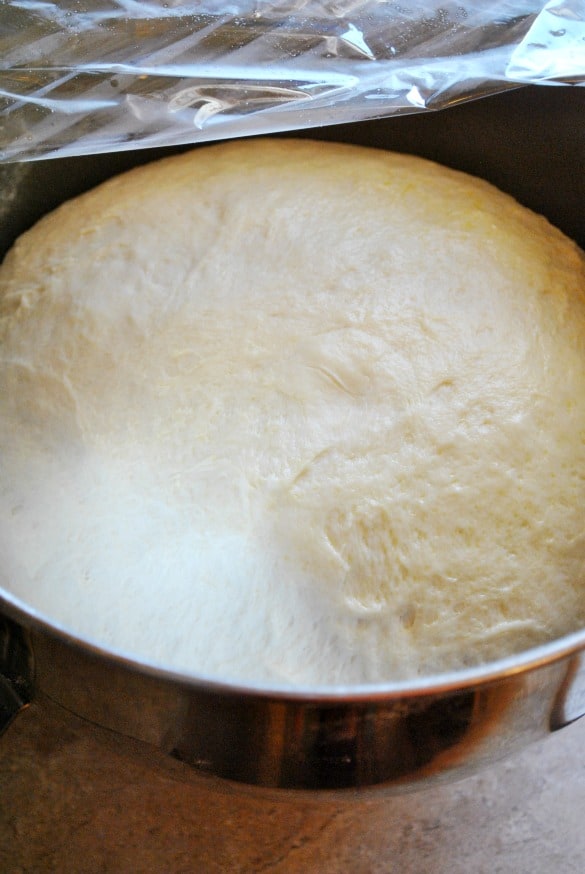 Punch the dough down, and now it's yours to do what you'd like with it!

You can, of course, bake it into two loaves of bread. And maybe even whip up a batch of honey butter to go with it, which is my absolute favorite way to eat homemade bread. Fresh out of the oven of course! 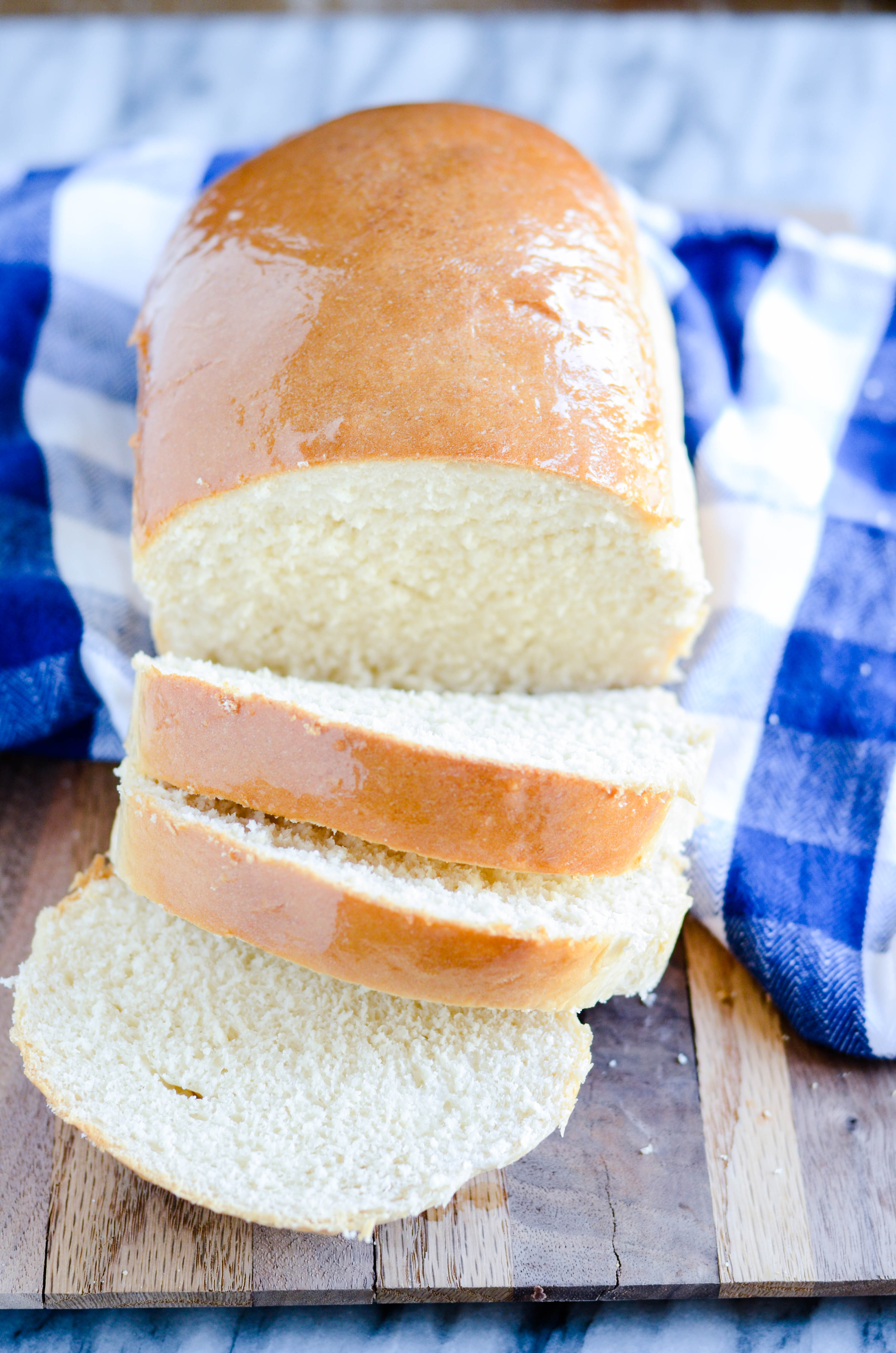 And don't forget that there are so many ways to use this dough recipe beyond just loaf bread! Some of them include: 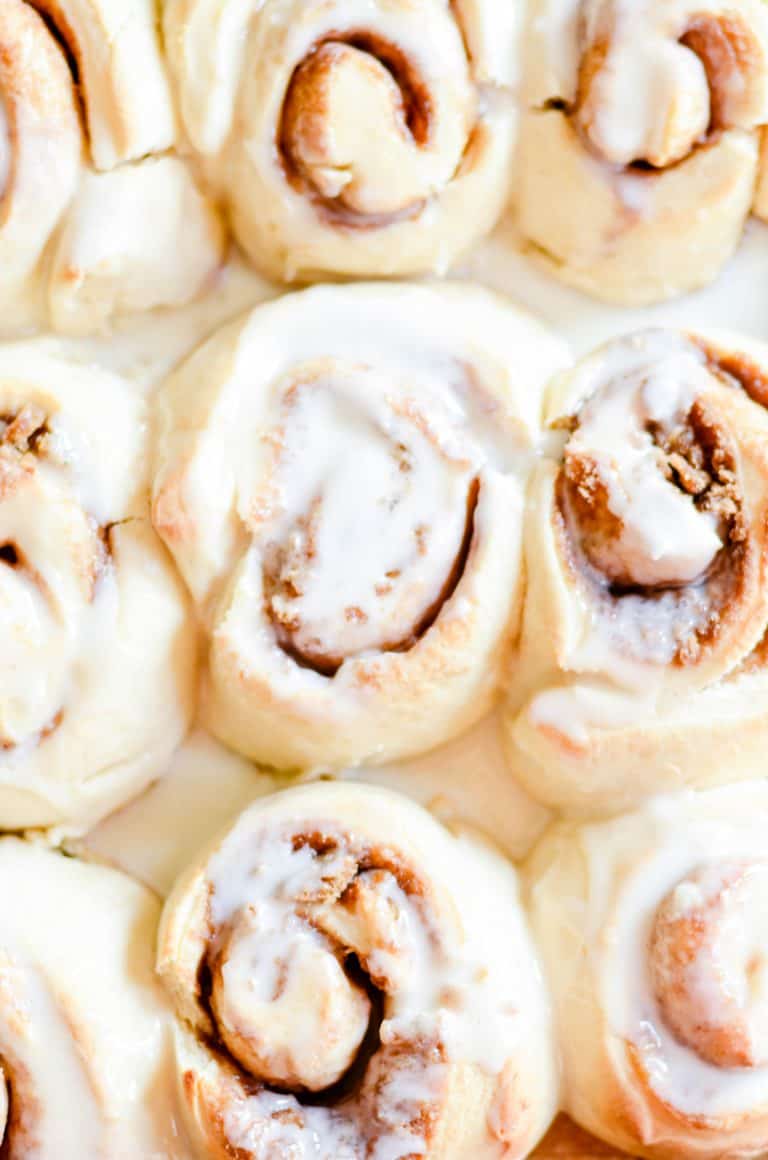 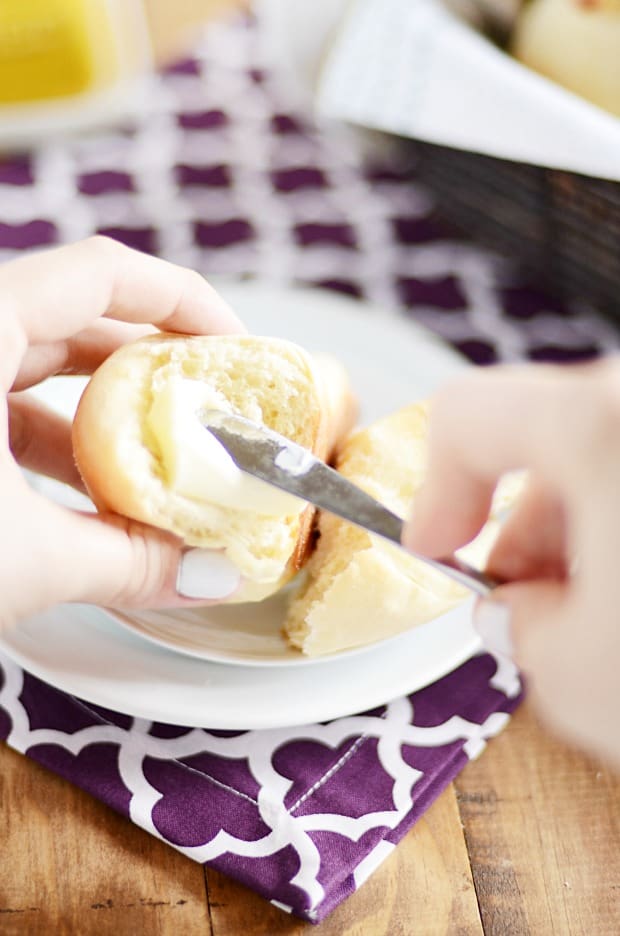 This recipe has been much loved and used by my family. I hope you love it as much as we do!

Add the warm water to your mixing bowl. Sprinkle the yeast over top and add the honey. Let rest for 5 minutes until the yeast is foamy.

Add the flour, dry milk, and salt. Mix well until dough forms and is just barely pulling away from the sides of the bowl (I use the dough hook on my stand mixer to do this).

Cover and let rise until doubled. I place my bowl on a heating pad, and it only takes about 30 minutes.

Punch down the dough and divide it for use before second rise.

If you are making bread: divide the dough in two and shape each piece into a loaf. Place the dough into greased and lined loaf pans (I like to use a 9x5). Cover and let rise until doubled (again, I place my loaf pans on a heating pad to accelerate the process).

Bake at 365ºF for 30 minutes. Brush the tops with butter if desired.

65 Comments on “Master Yeast Dough Recipe & How to Proof Yeast”