I thought about waiting for a little while to post this recipe, since it's, oh I dunno, the billionth breakfast recipe I've posted in the past week. Buuuuuuuuuut, then I thought… nah! You guys seem to love breakfast as much as I do, so what the heck? Might as well ride the breakfast train as long as we're on it anyway!

Besides, these Honey Bun Pancakes are so much fun and out-of-this-world delicious, and I just couldn't wait to share. Especially since this recipe is from a cookbook that I have been suuuuuuper excited to get my hands on! 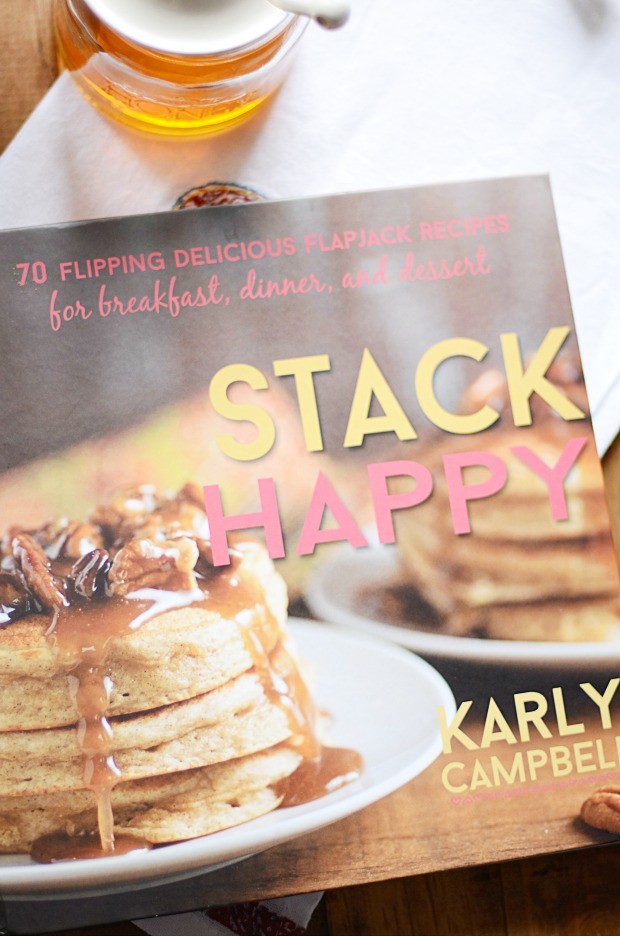 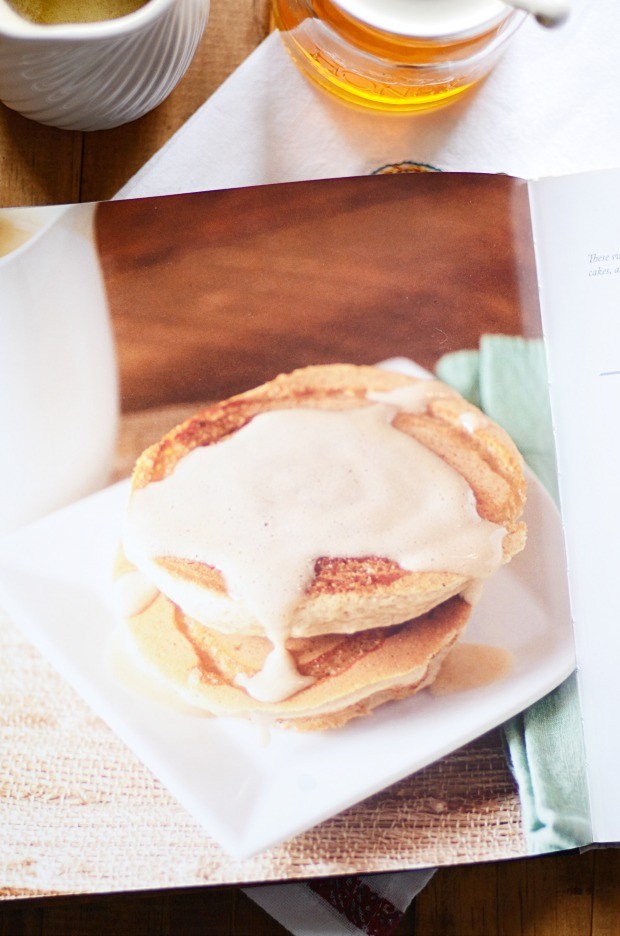 You guys. A cookbook wholey dedicated to PANCAKES! Does life get any better than this?!

Stack Happy was written by my sweet friend Karly Campbell, who you may know better as Buns in My Oven. She absolutely hit a home run with her cookbook, and it's already a favorite of mine. Among the many recipes I can't wait to try are Hoecakes (I'm just dying over these– think cornbread and honey!), Cinnamon Sugar Donut Pancakes, Raspberry Cookie Butter Pancakes, and Roasted S'mores Pancakes.

And it's so much more than sweet pancakes– she's got savory more than covered too! Including: Sloppy Joe Corn Cakes (omg), Loaded Potato Pancakes, and Corn & Jalapeno Cakes with Cheddar Sauce (I think I'm the most excited about that one).

There's even an entire chapter devoted to sauces and syrups!

And guys. The photography. Just oh-em-gee. I mean, there are full two-spread pages that are nothing but photo, because they are glorious. And is it just me, or does having better photos somehow make all the recipes taste better? I think it helps 😉 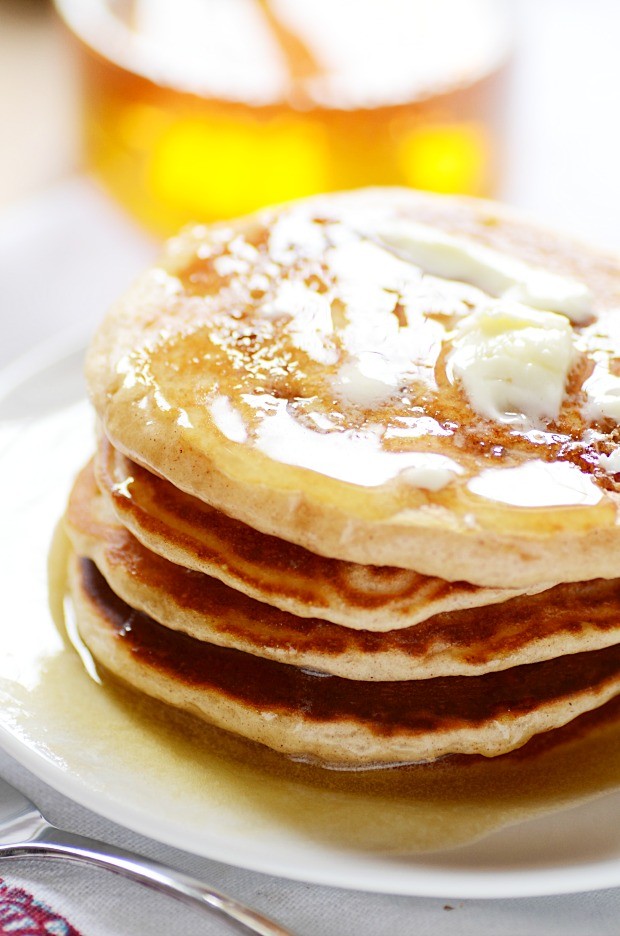 Let's talk a little more about the recipes I chose: Honey Bun Pancakes with Buttermilk Syrup.

First of all: my favorite thing about these pancakes is the cinnamon honey swirl in the middle. Basically the same way you make Cinnamon Roll Pancakes (you've seen those, right?). The problem with cinnamon roll pancakes is generally that the cinnamon swirl makes a huge mess. It leaks out from the pancake, spills all over the griddle, and burns horribly. They're difficult to make in my experience!

But apparently a honey swirl is a totally different story. Because there was no spillage or burnt sugar. All it did was cook beautifully into the pancake and make it actually taste like a real HONEY BUN! Seriously amazing. 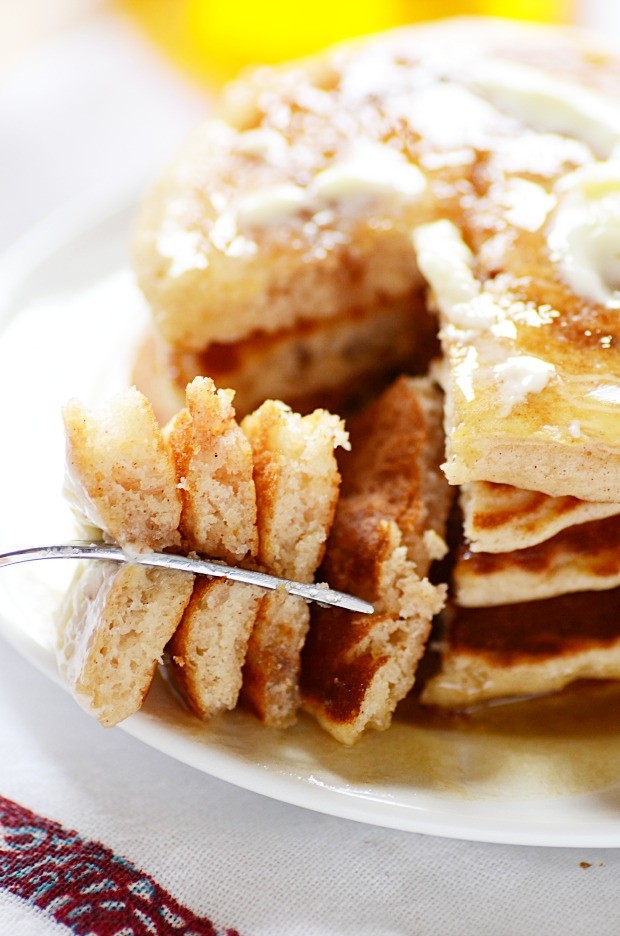 If the honey swirl was my favorite thing, then the Buttermilk Syrup had to be next up. Maybe it's even my real favorite– it's an impossible decision! This syrup was everything I could have ever wanted and more.

And if I might just make a suggestion here: don't be afraid to use a heavy hand with the syrup! Normally when I eat pancakes, I'm really good about measuring out some ridiculously small portion of the syrup. Like a tablespoon or something. But let's not pretend here– these pancakes are all kinds of decadent and delicious. There is no room for syrup portion control in a dish like this one. Really. There just isn't.

So throw any notions of using this stuff sparingly out the window and give these pancakes a good bath in the stuff. You will be so, so, so happy you did 🙂

Enjoy! And be sure to pick up a copy of Karly's Stack Happy cookbook for WAY more amazing pancake recipes like this one!