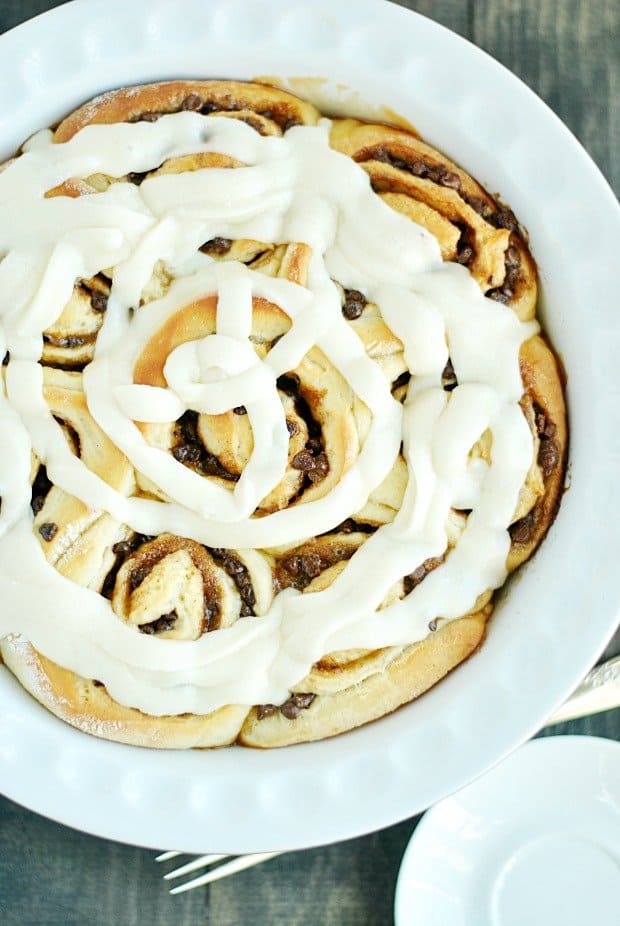 I really need you guys to be able to reach through the screen and take a bite of these. Because I simply do not have the words to do these justice.

First off, I totally changed the dough recipe. I ate Thanksgiving with my Aunt Carol this year and was reminded how much I love her flaky, buttery, heavenly soft crescent rolls. And this was the first year that it actually crossed my mind to ask her for the recipe– which is now the base of this cinnamon roll recipe.

If you do much bread making, I think you'll notice how different the recipe is compared to most dough/bread recipes. There's a LOT more sugar than you would normally use, THREE eggs (and I hardly ever use eggs in dough making!), a lot of butter, and scalded milk. Overall, it's a drastically different recipe than I've ever used to make any kind of bread dough before. 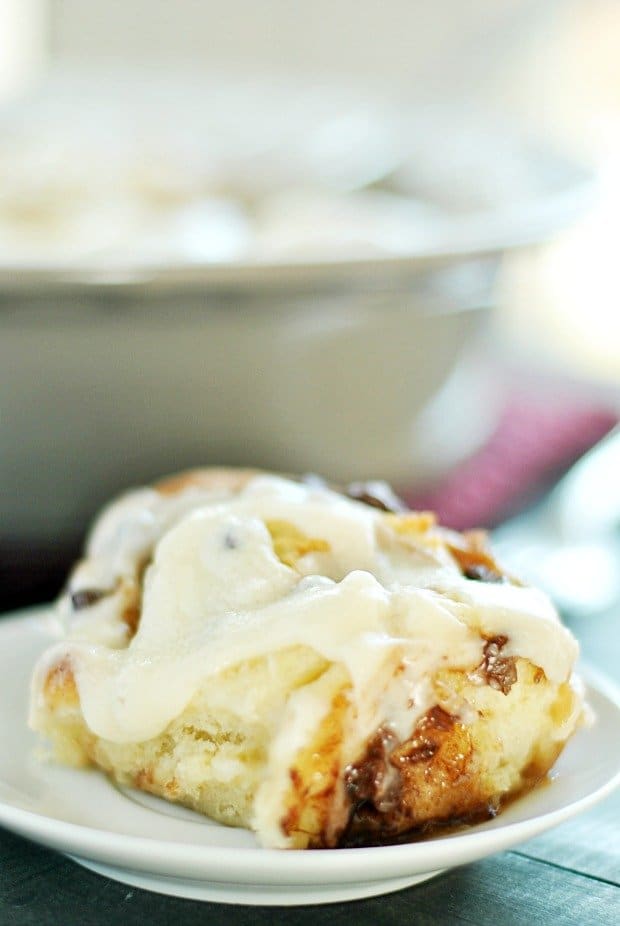 The second change I made was a deviation from my go-to cream cheese frosting. I've been dying to attempt an icing that tastes like the kind of you get in a can of store-bought cinnamon rolls (is it just me, or could you drink that stuff with a straw?), and I think I got it just right with this recipe.

And as an added bonus: it's super easy. If you can work a whisk, you can make this icing.

If you've never made homemade cinnamon rolls, this is where you want to start!!! This recipe is absolutely perfect and will be the staple cinnamon roll recipe in our house forever more (with and without chocolate chips!!).

Dissolve the yeast into 1/4 cup warm (about 125ºF or the same temp as a warm bath) water with 1 tbsp sugar.

Scald the milk over medium-high heat (milk should be about 180ºF). Stir continually so the milk does not burn.

Remove from heat and add cold butter (this will help in bringing the temperature down faster). Stir as the butter melts. Milk needs to cool to 125ºF (think warm bath water).

While the milk is cooling, beat the eggs and 1/2 cup sugar in the bowl of a stand mixer. Add the yeasty water, the cooled milk, and the salt and 4 cups of flour to the mixing bowl. Use the bread hook to mix and knead.

Once a sticky wet dough has formed, add more flour (by 1/4 cup at a time) until the dough is pulling away from the edge of the bowl (but still slightly sticky). Lightly grease the bowl and dough. Cover and let rise until double in size (about 30 minutes in a warm place).

Meanwhile, mix together the 1 cup brown sugar with the 2 tsp cinnamon. Set aside.

Roll the dough, starting at the long side. Slice into 9-12 pieces. Place them cut side down into a well greased 9x13 baking dish, jelly roll sheet, or into multiple pie pans (which is what I like to do).

Make the icing: vigorously whisk together the melted butter, powdered sugar, vanilla, and milk until a smooth icing forms. Drizzle over cinnamon rolls before serving warm.

Store covered at room temperature for up to 2-3 days. Dough freezes well, but let thaw completely and rise before baking.