This post does not contain any sponsored content, however I was provided with a slow cooker by Hamilton Beach to aid in recipe development. 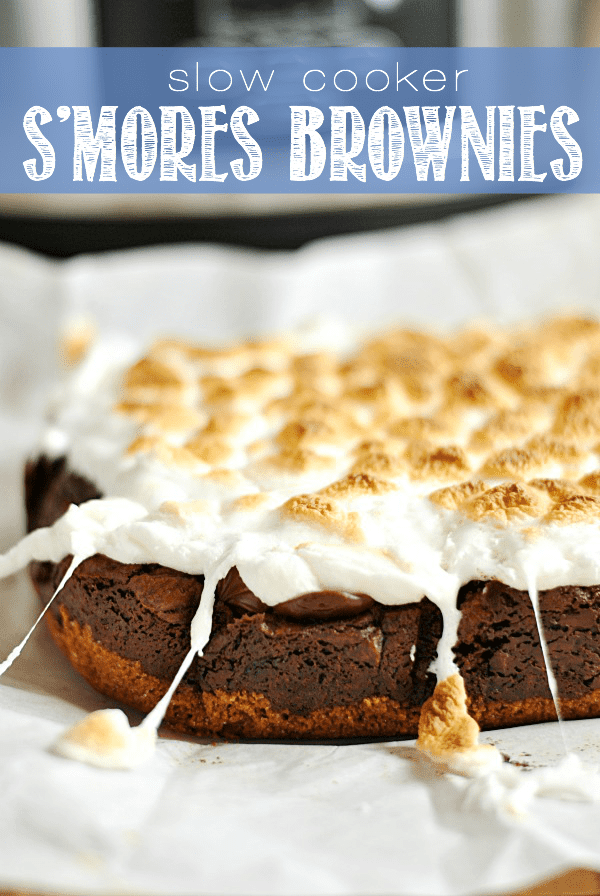 This post has needed to happen for a very long time… my very first slow cooker dessert recipe! (Well, except for this hot chocolate. But I don't think hot chocolate really counts, do you?). It's crazy that it's taken me so long to do this, because I am a major slow cooker-user in my personal cooking life.
There are two very noteworthy reasons to make desserts in a slow cooker whenever possible…

Reason #1: There's a bit more time in between prep and ready-to-serve. Which is especially helpful when you're busy in the kitchen preparing lots of other foods at the same time! It frees up your oven and your hands to multi-task. Whether you're entertaining dinner guests or prepping for a game-day feast, slow cooking a dessert means you don't have to leave what you're doing for a toothpick-test marathon.

Or is that just me?

I feel like any time I'm trying to time a baked dessert for dinner guests, it ends up being a total nuisance. On top of trying to prep the other food, I'm working like crazy at the same time to get dessert oven-ready so it can bake while we eat. And then, of course, I'm getting up and down from the table ump-teen times to check on done-ness (which also means the oven timer is going off every 5 minutes– because that's not obnoxious at all… *eyes rolling*).

Anyway. The solution to all that madness? Just pop it in the slow cooker and forget it for a couple of hours! It's so nice.

Reason to Slow Cook Your Desserts #2: Slow cooking involves a lot of steam cooking. And steam is excellent for creating seriously moist and dense baked goods. Another perk? In this particular case, it's really awesome for getting great gooey marshmallows! Sometimes baking marshmallows can make them brittle and dry or even a little tough.

But letting them melt over the brownies in the slow cooker kept them perfectly melt-y and gooey. I stuck mine under the broiler for a sec just to give them that beautiful, golden brown look and a slightly crisped texture. But that's totally optional. They would have been delicious without the browning.

I think slow cookers tend to get the reputation that they are only suitable for frozen chicken breasts and other dinner-y things. And while those foods are awesome (I mean, obviously– because, um, hi creamy-delicious-chicken-dinner-that-I-stuck-in-the-slow-cooker-this-morning-and-haven't-touched-since; I love totally you), but how cool is it that you can make desserts in there too?

Be sure to check out these other fabulous slow-cooker recipes: When ready to serve, lift brownies out using the parchment paper and cut into 3-inch pieces.

Cooking time may vary based on your model