Pumpkin, Nutella, and marshmallow cream make this like no other pumpkin fudge you've had before! 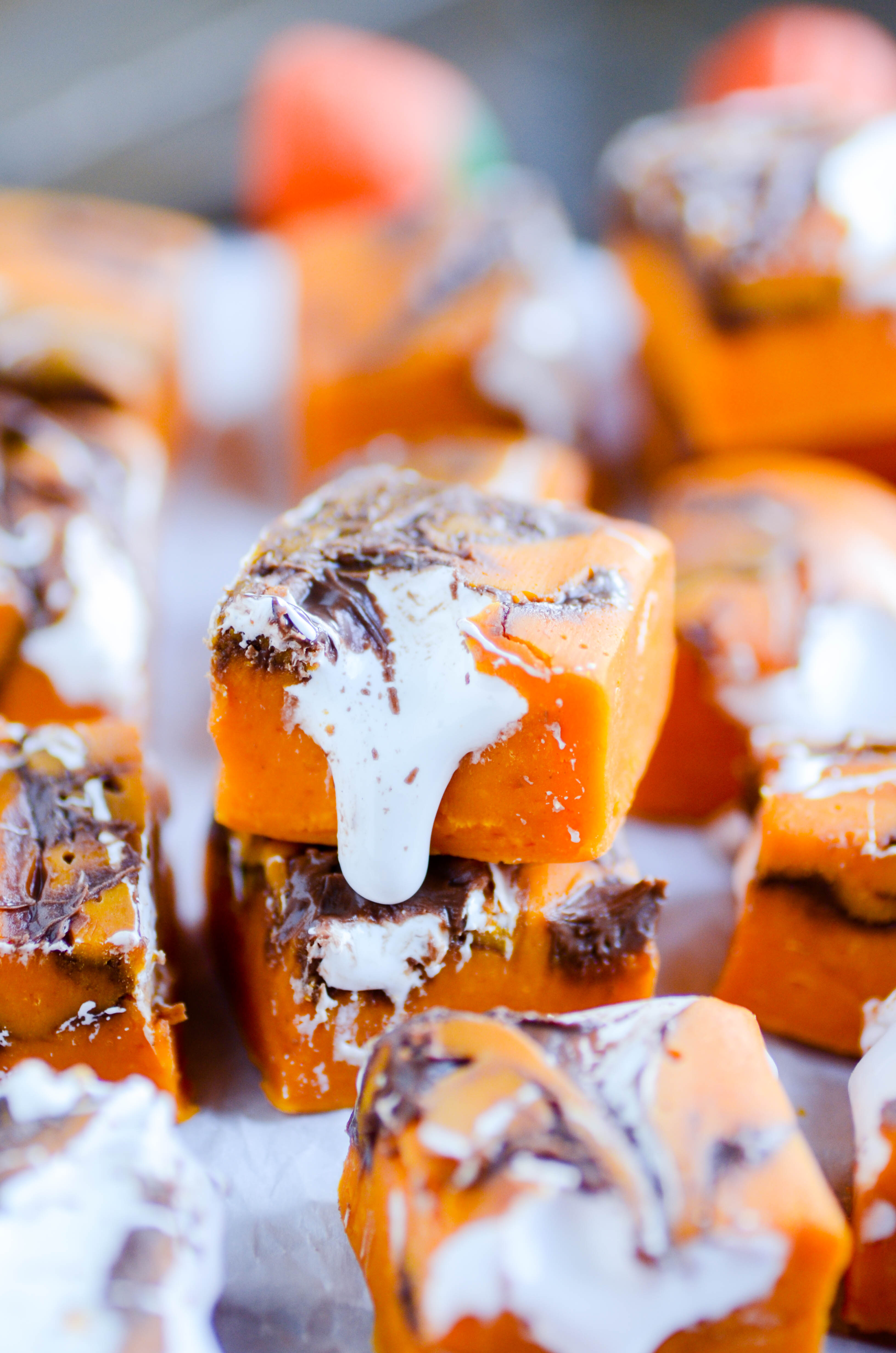 Warning! You are about to enter high addictive pumpkin territory.

Let me start out by saying that this recipe is one of my all-time personal favorite pumpkin recipes. And you should know that I'm rather picky when it comes to pumpkin…

HOWEVER– I do not like weird pumpkin desserts. Tell me I'm not alone here, but there are just some things that pumpkin SHOULD NOT go in. Am I right?! For instance, it is my firm belief that pumpkin (as it REAL pumpkin) should not not go into anything not baked. I also have really strong feelings about pumpkin and oatmeal– that the combination should never happen ever.

So when I saw some no-bake pumpkin energy bites recently, and I barely held it together. Even now, I'm kind of gagging in my mind ????. But different strokes and all that, right? 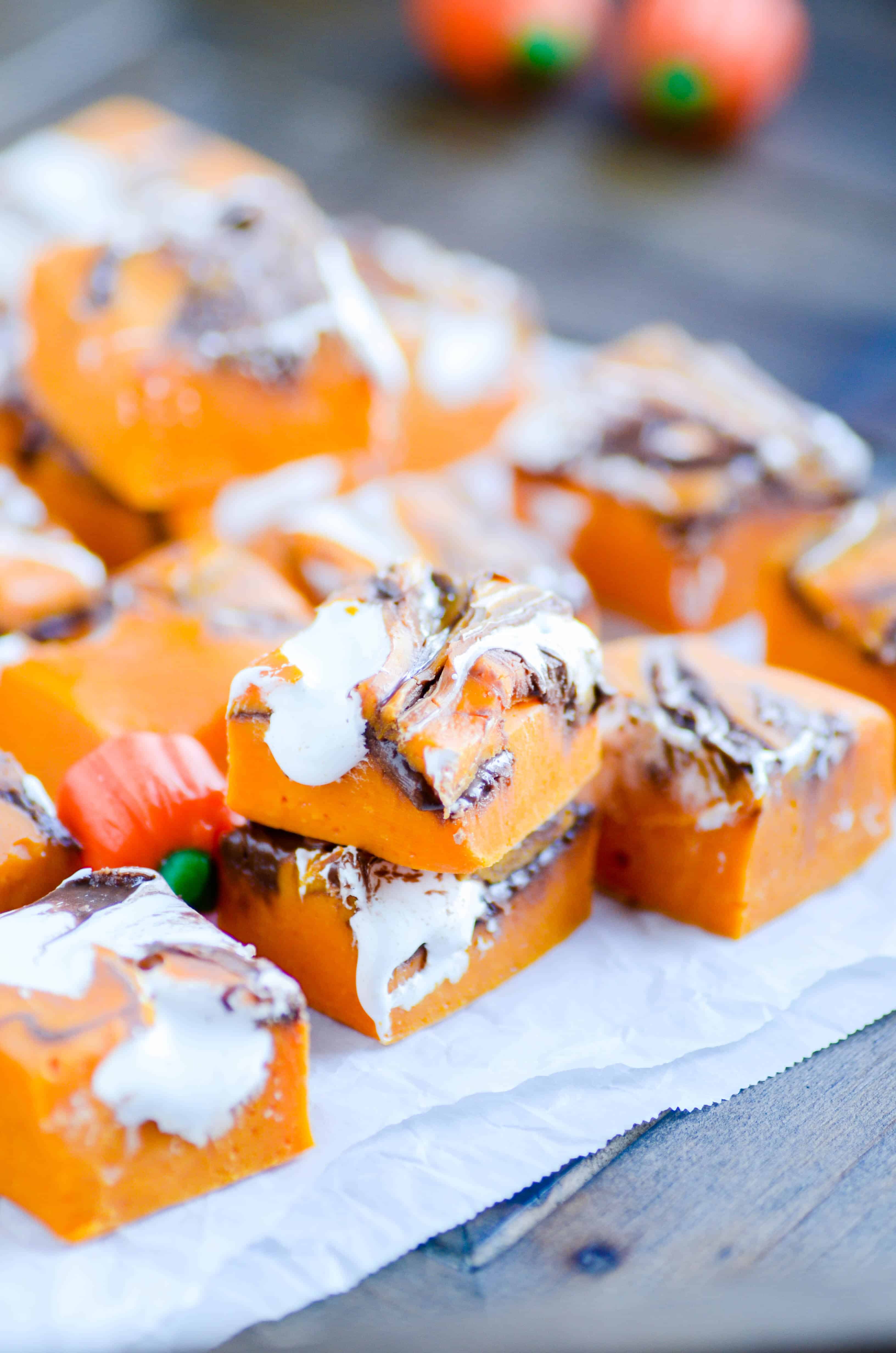 Now that you know how picky I am about my pumpkin treats, you know that you can completely trust me as I gush over this amazingly fabulous pumpkin fudge.

Which contains no actual pumpkin, just to clarify– because, again, pumpkin should be baked. In my humble opinion ????.

The base of this fudge is actually a variation of my favorite 2-ingredient fudge, which is essentially 3 cups of chocolate melted together with 14 ounces of sweetened condensed milk. It's easy and simple, and it always turns out just right.

For this recipe, I'm using 3 cups (about 2 bags) of Nestle's Pumpkin Spice Morsels. In the past, I've used Hershey's Pumpkin Spice Kisses to make this same fudge, but it was so unnecessarily tedious to unwrap 3 cups worth of Hershey Kisses when I could just dump out a bag of morsels instead!

I find both the Hershey Kisses and the morsels at Target. Feel free to use either one you can get your hands on. 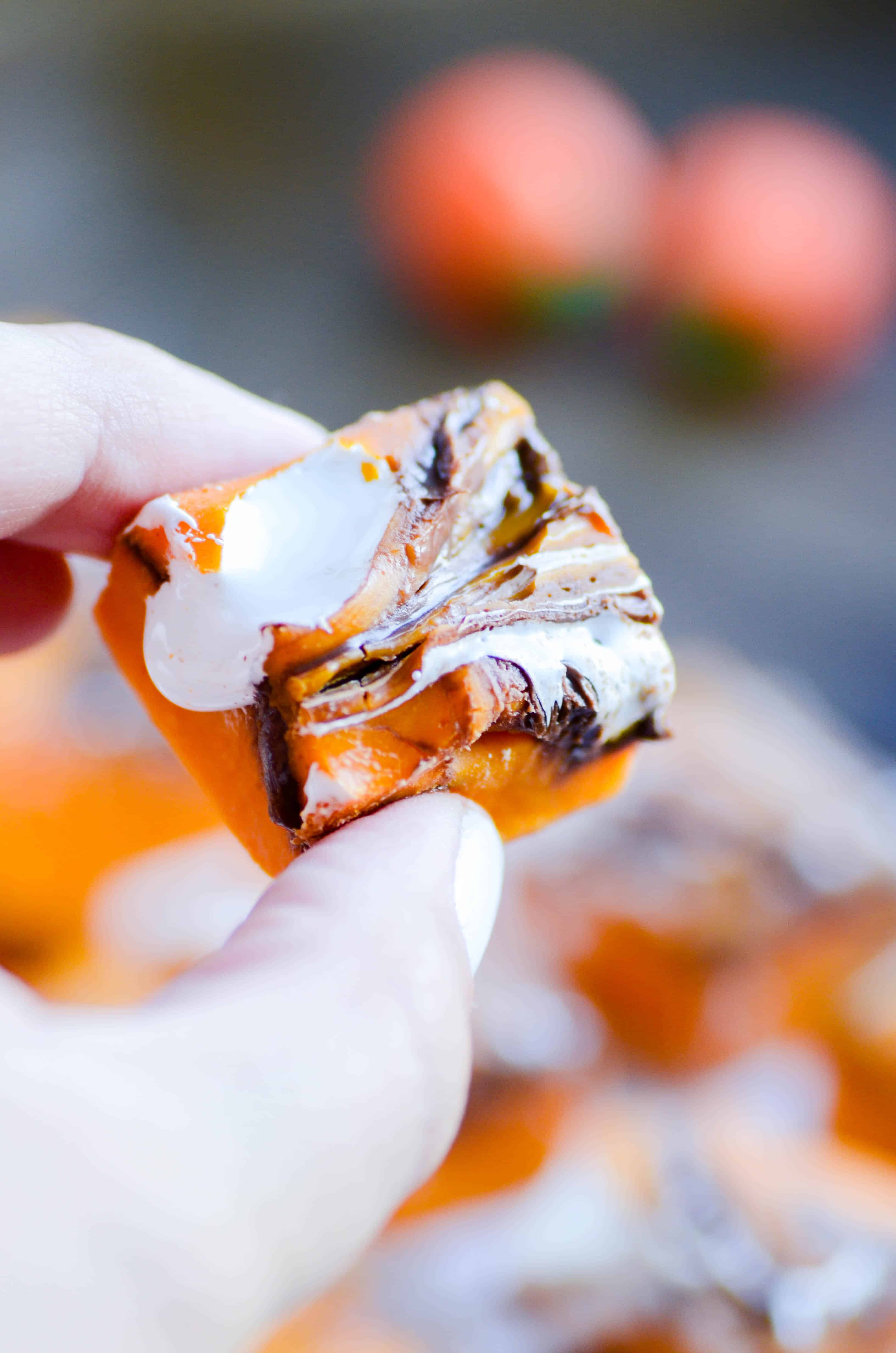 Once you've made the 2-ingredient fudge base and poured it into the prepared pan, you need to act quickly to get the Nutella and marshmallow cream swirled in before the fudge begins to set.

I went ahead and prepped two piping bags (you could even just use big zip top baggies) by filling them with the Nutella and cream. Once the fudge is poured, snip of the ends of the piping bags and squeeze little pockets of Nutella and marshmallow throughout the fudge. Swirl it all a little with a knife, and voila!

Hands down, the best pumpkin fudge you will ever eat. I promise!

Prepare a 9x9 baking dish by lining it with foil or parchment paper.

Prepare two piping bags (or large zip top bags) by filling one with the Nutella and one with the marshmallow cream. If using zip top bags, make sure the filling is pushed to one corner of the bag and twist the top to form a makeshift piping bag. Set aside.

Over LOW heat in a medium saucepan, stir together the sweetened condensed milk and the pumpkin morsels until melted and smooth. This may take up to 10 minutes, but DO NOT increase the heat! Just keep stirring...

Once smooth, pour the mixture into the lined baking dish. Immediately snip the corners of the piping bags and use them to inject pockets of Nutella and marshmallow cream throughout the fudge. Swirl with a knife.

Let cool completely at room temp for a few hours. (you can speed set the fudge by placing it in the refrigerator for up to 20 minutes).

Once cooled completely and set, cut into 1" squares for packaging and serving.