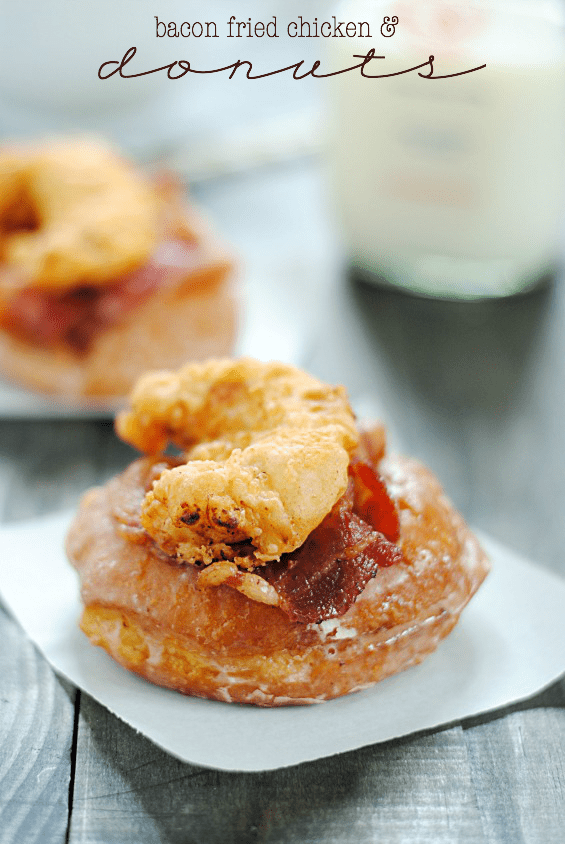 Which means eating fried chicken atop a fluffy Belgian waffle for breakfast isn't all that weird to me. And, for the record, I'm happy with fried chicken just about any time of the day, especially when it comes drowned in maple syrup.

My husband and I were exposed to the flavor combo for the first time last year during our trip to D.C. There are two fabulous donut eateries that boast fried chicken and donuts on their menu (GBD and Astro Donut— GBD was, by far, my favorite). Neither one of these spots actually serve the fried chicken and donuts together as far as I could tell (although I think they do at Gourdough's). The point is that the donuts are fried in the same oil that the chicken is. Which gives them are really unique and delicious bold flavor.

I decided I wanted to go double on the flavor layers in my homemade version of Fried Chicken and Donuts. In this recipe, I reserved the bacon grease to fry the chicken first and then the donuts. The donuts (the easy Pillsbury version, of course) are dunked in a maple glaze and topped with Hormel Maple Bacon (by the way: omg— best bacon ever!) and a strip of fried chicken. Each golden delicious bite melts in your mouth and will have you coming back for more!

Note: I threw in shortcuts where I could (like using refrigerated biscuit dough), but ultimately this is just a recipe that takes a little time. But don't let that put you off! It's completely worth the time (which is mostly down time anyway, waiting for things to fry at a lower temperature so they don't burn). I did this all in one afternoon. But you could easily break it down into two parts– make the bacon and reserve the fat at night. Then reheat it and fry up the donuts and chicken in the morning for a fresh, warm breakfast treat!

And since I anticipate someone will ask…. you can use already breaded and fried, frozen chicken tenders to save on time and mess. But I have yet to find a chicken tender with a flavor that will work here. It's just not the same as creating a breading yourself (which is a little sweeter than you'll find in the frozen variety) and eating it fresh.

For the Fried Chicken:

For the maple glaze:

Cook the bacon and heat the oil:

*In a smaller sauce pan (like the 1 quart) you'll have a stronger bacon flavor, since you'll need less additional oil to reach a 2-inch depth. However, it will take longer to fry the chicken, since you'll have less space in the pan to fry more than one strip at a time.

**If it sounds like firecrackers are going off when you flick water into the oil, take it off the heat for a bit so it can cool down. It should only pop a little bit.

***I suggest letting the oil cool for a few minutes in between frying the chicken and the donuts. Overly hot oil can ruin the donuts by burning them on the outside while leaving them doughy inside. ANYTIME the oil begins to smoke or brown the food too quickly (like within moments), it is too hot and needs to be removed from the heat for a bit.