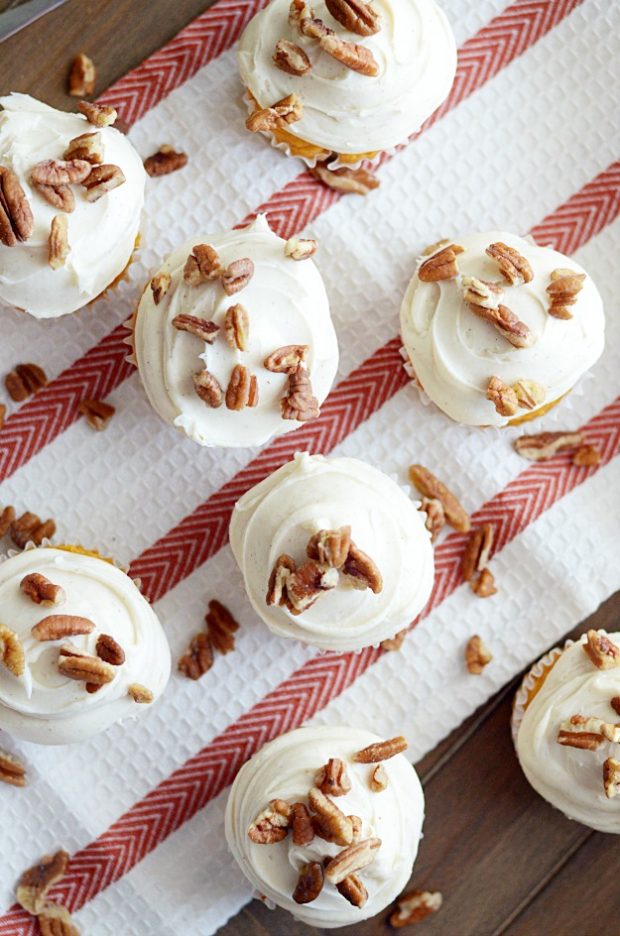 I have to admit, when I look at these cupcakes, all I can see is that cream cheese frosting. 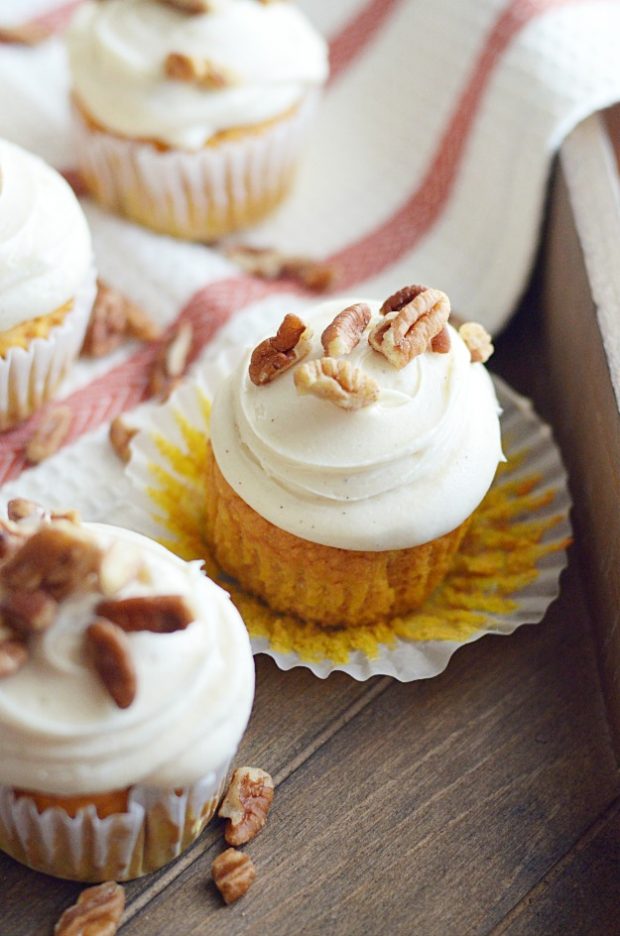 Back when I thought I wanted to own a cupcake bakery (have I told you about that short lived dream?? Have to say I'm sooooooo glad that didn't work out!), I would cart cupcakes around to just about everywhere I went, including my full time retail/sales-y/corporate-ish job.

And I remember someone there once saying, “you know, it's really all about the cake. Anyone can make good frosting, but the cake… you have to really know what you're doing to make a good cake.”

7-ish years into the business of making A LOT of cakes, cupcakes, frostings, and other desserts nearly every day… I have to respectfully and adamantly disagree. 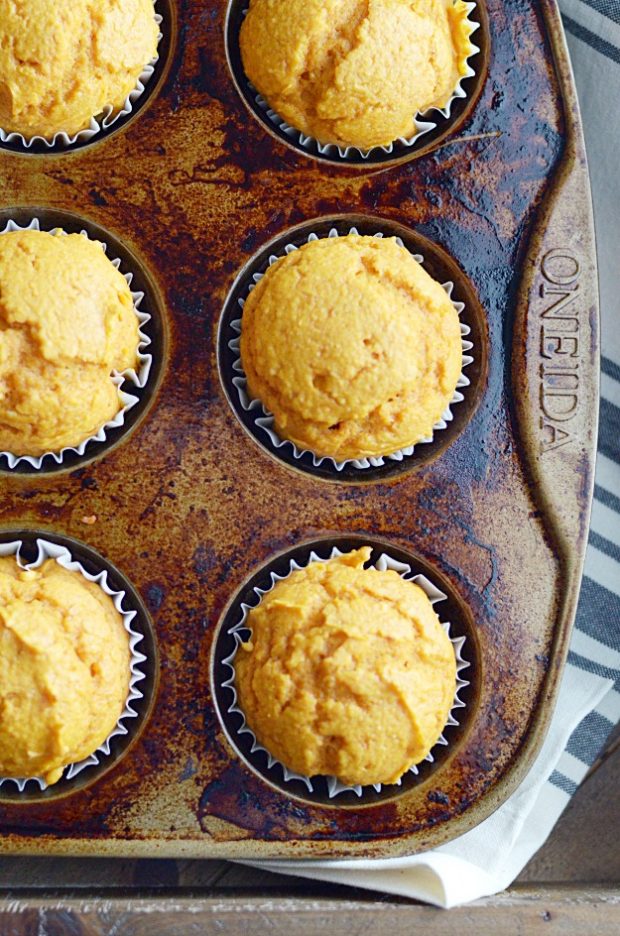 Because here's the thing. A doctored up cake mix makes about as good a cake as I've ever had. I'm a cake fiend, and I'm not ashamed to admit I prefer cake mix to from-scratch cakes a good 90% of the time.

This cake mix pumpkin cake recipe has been my go-to for years. It's simple and easy to remember: cake mix + a can of pumpkin. You could really stop there, but I usually add a little milk, vanilla, and pumpkin pie spice just to give it that “homemade” taste.

Now don't get me wrong. From scratch cakes have their place. Like I don't think that  good banana cake can be outdone by a cake mix. And I do actually like Red Velvet from scratch marginally better than a cake mix Red Velvet. But other than that… I hardly see a reason to deviate from my favorite mixes. And that's the truth. 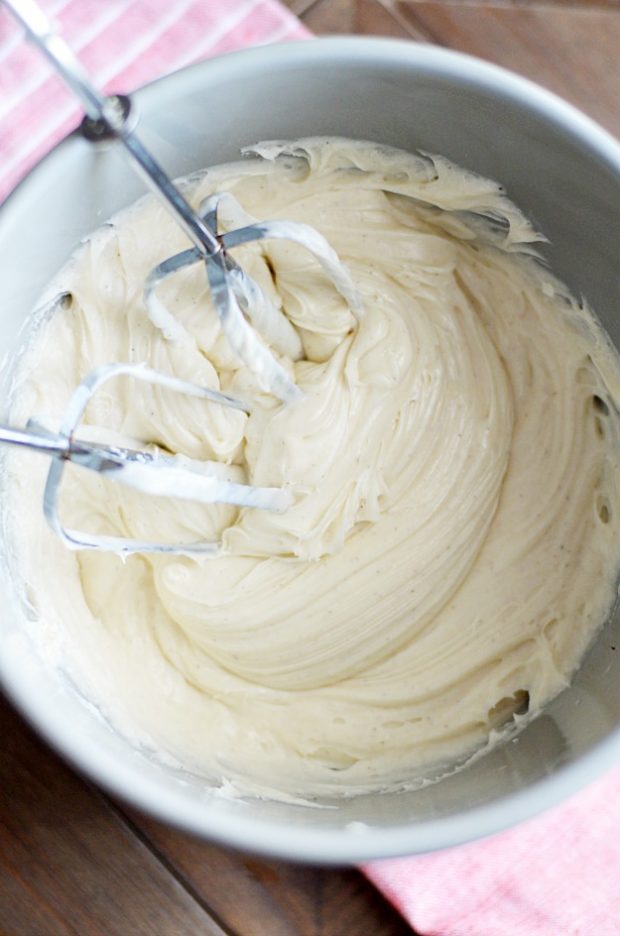 But frosting? I do like the store-bought stuff, and it has it's place in my recipes for sure. But there are some from-scratch frostings that just cannot be beat by something from the store. Like my mom's brownie frosting, Grandma's 6-Layer Cake Frosting, and this soft sugar cookie frosting.

So when it comes to cream cheese frosting in my recipes, homemade is the only way to go. And it's really pretty easy as far as frostings go– as long as your expectations are realistic. And what I mean by that is that you can't treat it like a buttercream. This recipe won't be as stiff or as sturdy as a decorating buttercream. So don't plan to do any sharp piping work or anything with it.

But you CAN plan on falling in love with it. It spreads on nice and smooth and creamy. And the flavor is light and dreamy with just a little tang from the cream cheese and a whole lot of vanilla flavor. I love using vanilla paste or crushed vanilla in place of the extract. Can you see those little delicious flecks?? 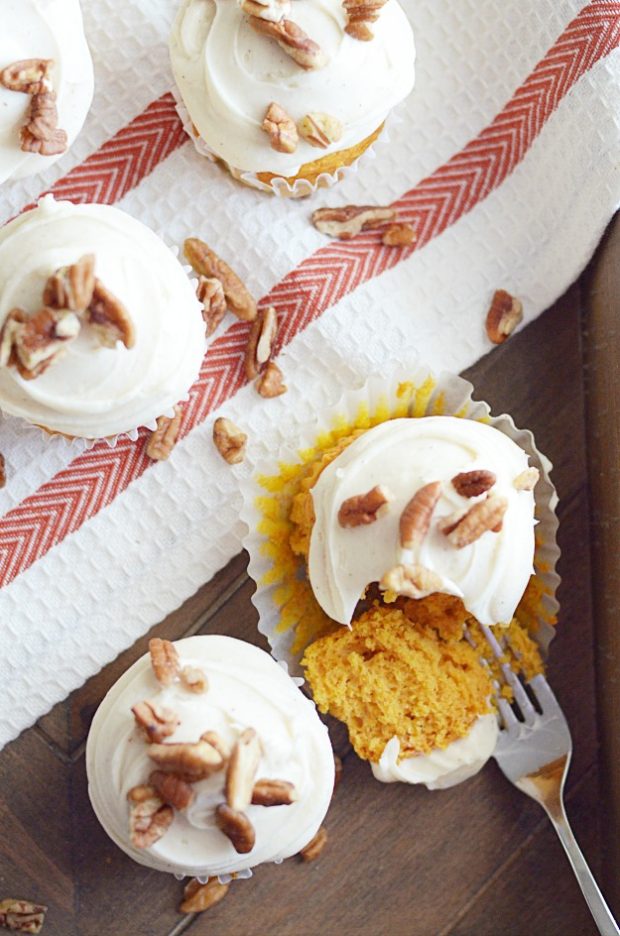 This recipe is such a keeper, ya'll. It's one of those no-fail, timeless classics that's worth hanging on to and pulling out at least once every Fall.

Mix together the cake mix, pumpkin, milk, vanilla, and pumpkin pie spice until batter forms. It will be a little thicker than a typical cake batter.

Meanwhile, make the frosting: use an electric mixer to beat together the butter and cream cheese until smooth. Mix in the powdered sugar and vanilla until smooth.

Spread the frosting on the cooled cupcakes. Top with pecans if desired.