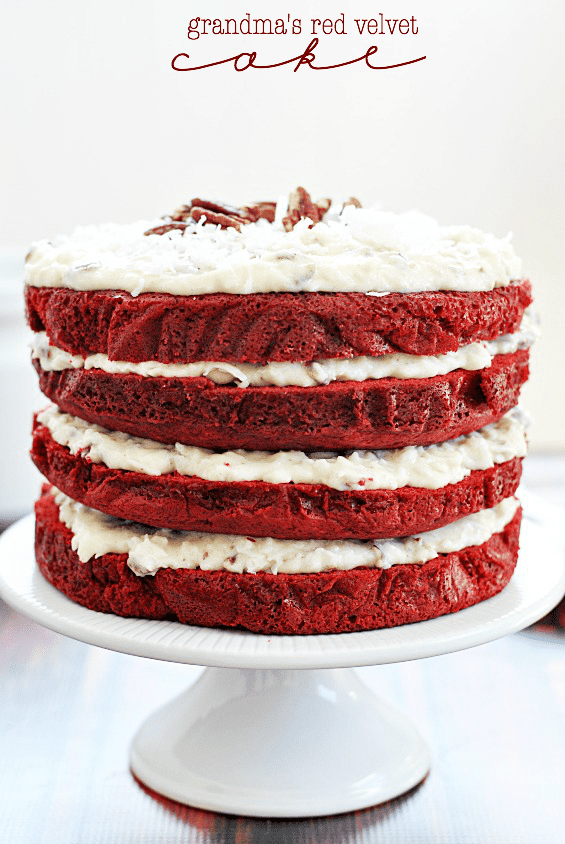 I know I really missed the boat on getting this posted in time for Valentine's day and the rest of red velvet-palooza that's been happening here all month.

Palm to the head.

But I just had to post it anyway, because it's seriously the best red velvet cake I've ever had. And even better than that– it's a family recipe. Like, a real family recipe.

I mean, of course I have other family recipes on hand. But they mostly come from… like, you know… underneath the Cool Whip lid and stuff.

But not this one. It's completely legit, from scratch, and totally amazing.

I have a small notebook with a handful of recipes that come from my mom, aunts, grandparents, and those recipes are really special to me. This one happens to be from my great grandmother (and we even have it in her handwriting!). My Grandma made it for our Christmas dessert last year, which was the first time I remember eating it.

I was blown away. 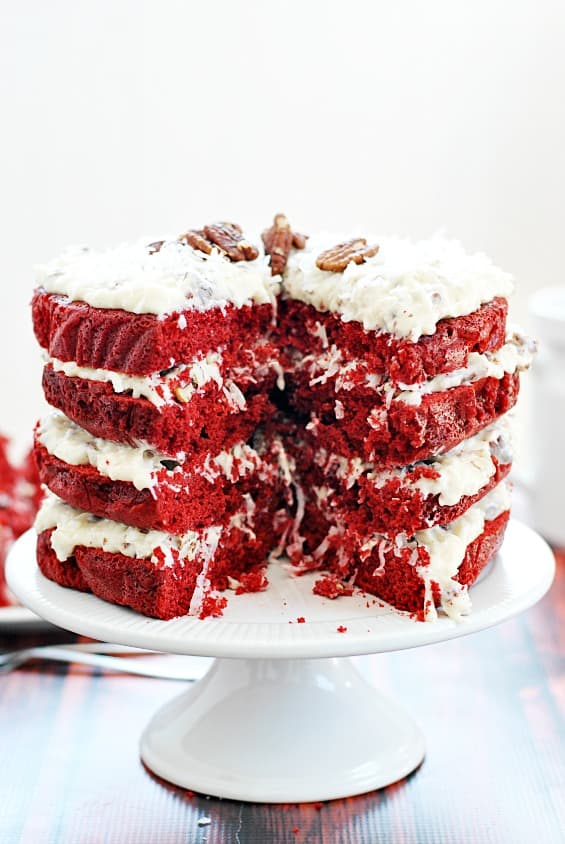 The cake manages to be moist and dense at the same time. The frosting isn't a traditional cream cheese frosting, which surprised me– but in a good way. It's filled with pecans and coconut, and it's not overly sweet since the base is made from a flour and milk paste. I know that sounds a little weird, but you'll have to take my word on it. This frosting is FABULOUS. And it really pairs perfectly with the red velvet.

My great-grandma's recipe calls for making this a 6 or 8 layer cake (which my Grandma, the queen of layered cakes, pulled off beautifully at Christmas), but I'm took that down a notch and went for 4 layers. However, if you have the magic touch with layered cakes, definitely go for it. I'd double the frosting if you're doing more layers though… just a note.

I hope you enjoy this special family recipe as much as I have!

For the Red Velvet Cake:

For the Coconut Pecan Frosting:

I have two versions of this recipe in my family recipe book. I didn't notice until I was typing this up that the frosting recipes are different. One recipe calls cooking 3 tbsp of flour with 1 cup of milk over the stove top until thickened, and then letting it cool before adding it to the butter and sugar. Obviously, I used the version that calls for mixing together 1 cup of milk with 1 cup of flour.

I have no idea how the other version comes together since I haven't made it myself, but if you are averse to using so much flour (I know that 1 cup of raw flour is substantial), I would definitely recommend trying the stove top version.