Crunchy, chewy, sweet & salty, and so easy to make! With a smothering of chocolate and M&M'S®, this toffee will be the first treat to disappear on any holiday cookie plate.

This post is sponsored by my friends at M&M'S® and was originally published in December 2015. 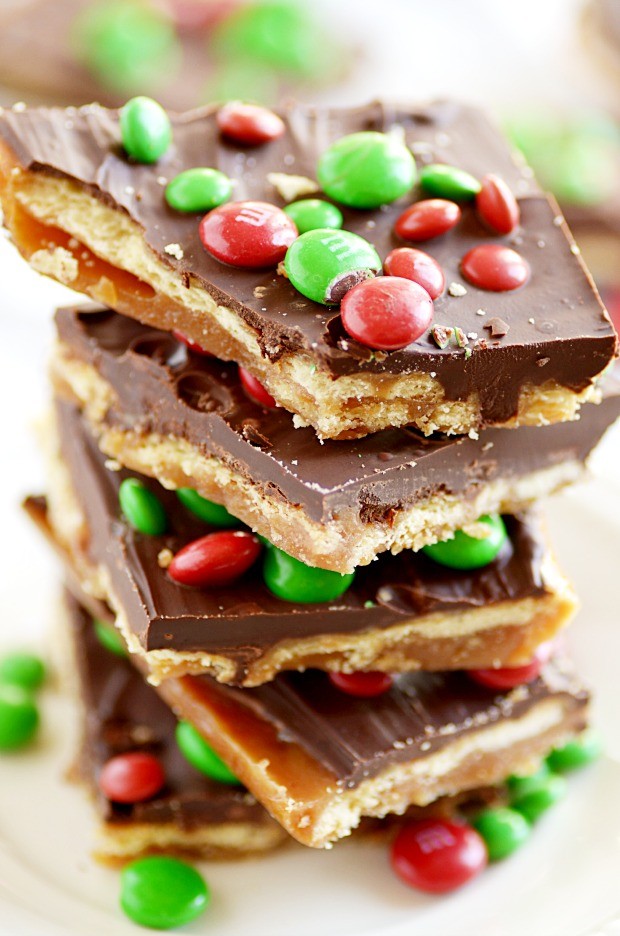 While this toffee isn't technically a cookie, it's still the 9th recipe in my lineup of the 12 Days of Christmas Cookies! And let's be honest here– who doesn't want Cracker Toffee showing up on their cookie plate anyway??
Maybe the Grinch. But I think even he would change his mind after just one bite.
Have you made this recipe yet?? I know it's been all over the internet forever and ever, but it took me a long time to try making it for myself. I loved eating it, but the thought of making “homemade toffee” gave me an instant migraine. 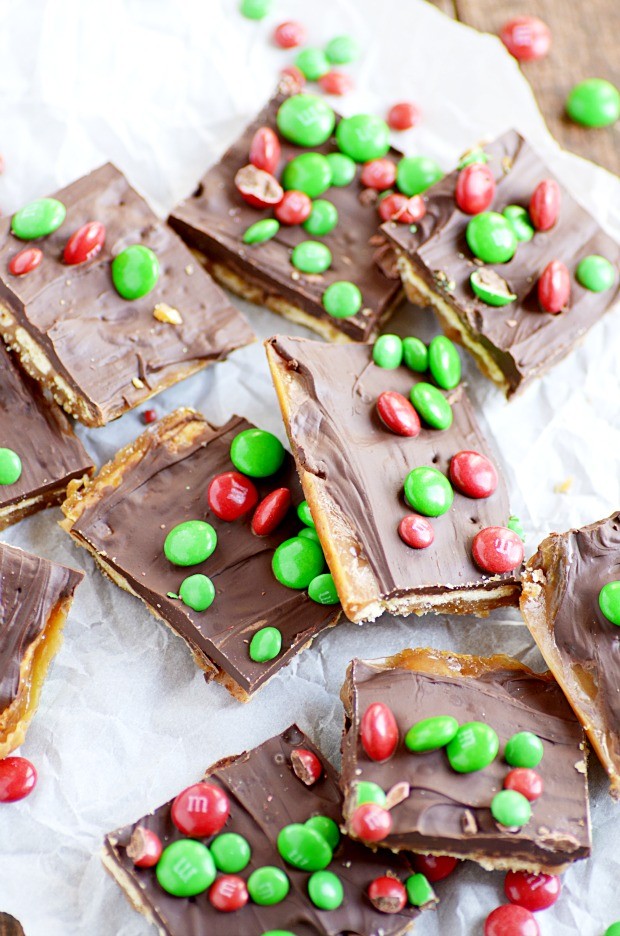 If you're anything like me, and the thought of making toffee from scratch has you headed for the hills, this post is for you. You can ditch the candy thermometer and lose those preconceived notions of a big mess and a complicated recipe. There will be none of that here!
You can actually pull off making this toffee (including washing the dishes) in under an hour! Let's break it down:
The first step is some very simple, but very crucial, prep work. You'll need a jelly roll pan (which is just a baking sheet with a rim). This recipe is for a half sheet pan (10.5 x 15.5). LINE THE PAN either with parchment paper or a silicone baking mat. This is going to allow us to pop that toffee right out of the pan easy peasy. 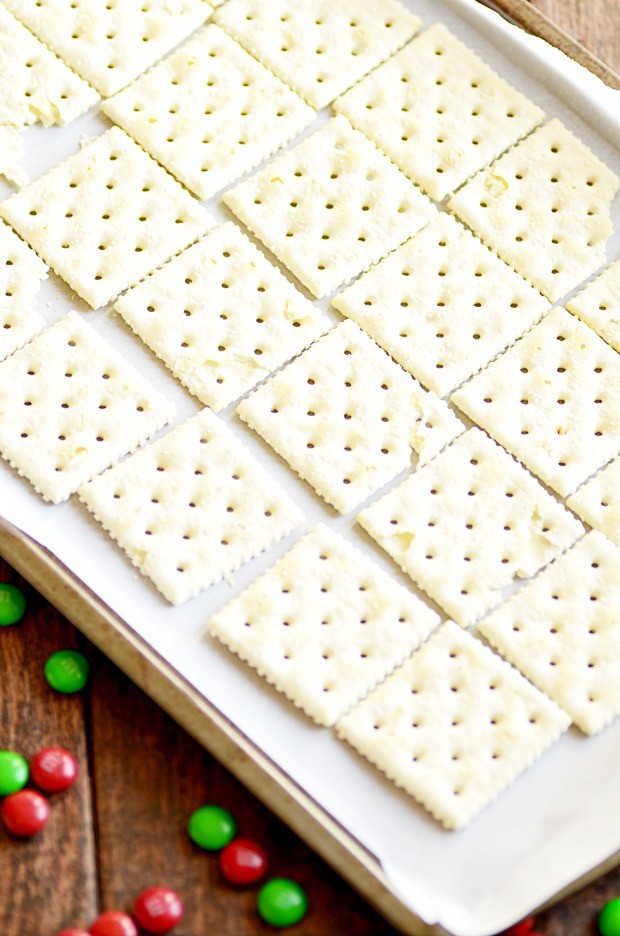 Next, line the pan with a layer of soda cracker cookies. So far, so good. Right?
After that, we'll be making the actual toffee. Here's the ingredient list: butter. brown sugar.
Yep! That's it! Equal parts of butter and brown sugar over medium-high heat, bring it to a boil, then leave it alone for 3 minutes. Pour that golden, sticky, sweet stuff over the crackers and pop it all in the oven for a mere 6 minutes.
Add chocolate chips and bake for another minute. This will get that chocolate all nice and melty, so you can spread it easily over the toffee.
Now my favorite part: add M&M'S! You all know me and my love for M&M'S, so I couldn't make this toffee without adding a bunch on top (does anyone else love the plain ones the best?!). Let it cool at room temperature for several hours to harden and cool ORRRRRRRR… stick it in the fridge so you treat yourself in about 30 minutes. Your choice there.
Now, that wasn't so bad, was it? If you haven't made this cracker toffee yet, it's really an absolute must! All you need is an hour and a few simple ingredients. There are really no excuses here.
Continue to Content

Preheat oven to 400ºF. Prepare a 10.5 x 15.5 jelly roll pan by lining it with parchment paper. Be sure to crease the edges, so that it's easier to lay the crackers in a single layer.

Place the crackers in a flat, single layer on the jelly roll pan. Don't worry about any gaps in between the crackers.

Melt the butter in a medium saucepan over medium-high heat. Mix in the brown sugar

. Bring to a boil (should be bubbling definitively around the edge-- you shouldn't wonder if it's boiling or not) and set a timer for 3 minutes.

Allow to boil without stirring. After 3 minutes, remove from heat immediately. Pour the mixture over the crackers, and use a spatula to gently spread the toffee over the crackers (it's ok if the crackers get displaced a little, but try to keep them as flat as possible).

Bake toffee-crackers for 6 minutes. Remove and sprinkle the chocolate chips on top. Return to oven for 1 minute.

Spread the melted chocolate chips evenly across the toffee with a spatula. Sprinkle M&M'S over top. Let the pan cool at room temperature for a few minutes before placing it in the refrigerator to chill for about 30 minutes, until hardened. Break apart to serve. Store chilled.

You also have to try these M&M'S Brownie Cookies! I'm obsessed. 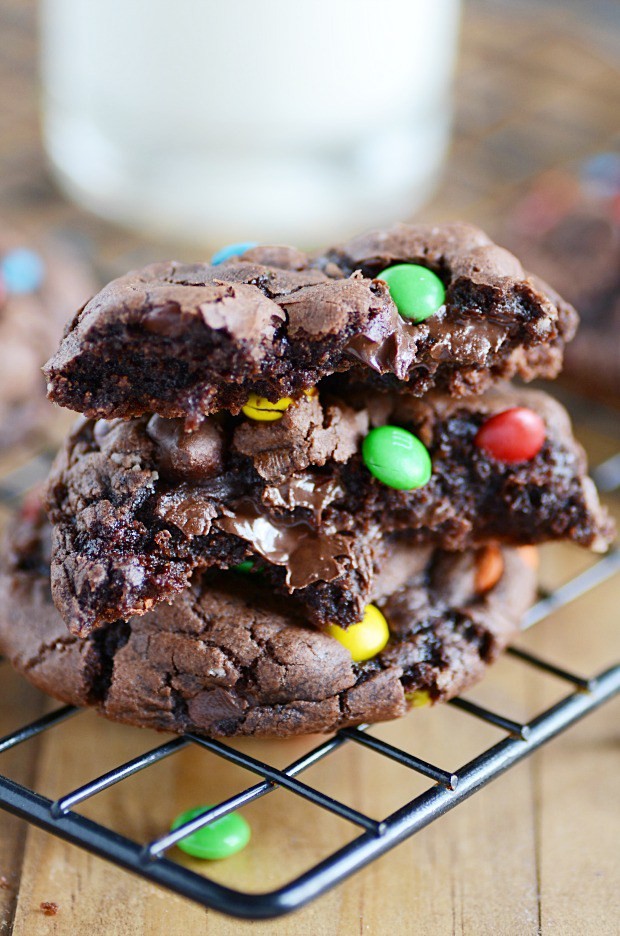