A Better No Churn Ice Cream (and Frozen Yogurt) Recipe

This is THE PERFECT no churn ice cream recipe thanks to a secret ingredient. It's just two ingredients (like the other famous no churn recipe), but this one has a way better texture, and it's not overly sweet! It seriously tastes and feels JUST LIKE real ice cream. 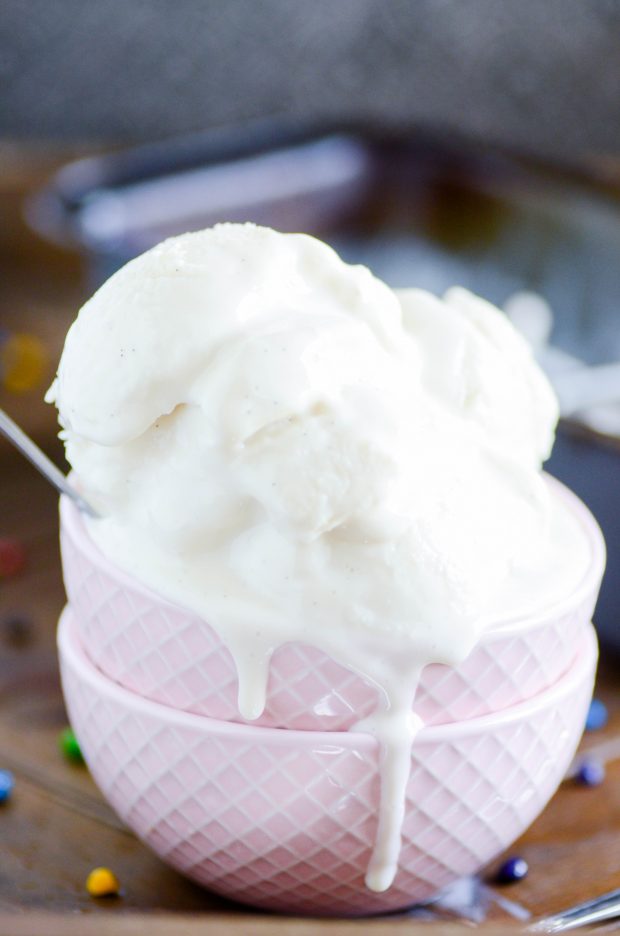 Did I mention I'm pretty pumped?? I'm SO pumped.

Why? Because I FINALLY have a two-ingredient, no-churn (read no machine required!) homemade ice cream that really, truly, 1000% tastes like ice cream. Really! 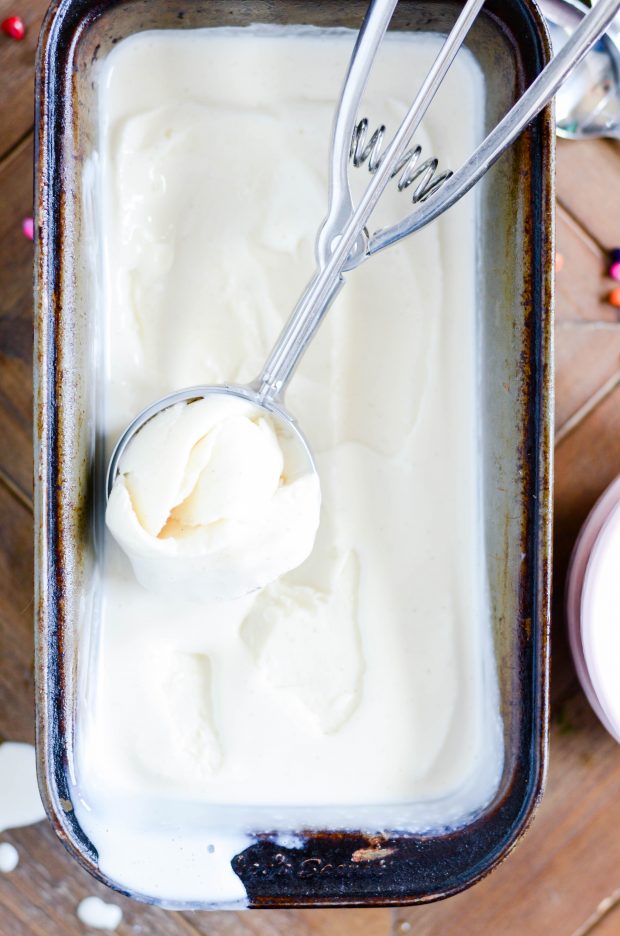 Have you ever made 2-ingredient, no churn ice cream like this? It's fine. I mean, I liked it well enough when I thought that was all there was. That you couldn't make anything better with just two ingredients and no ice cream machine. Back when I thought you had to settle for an overly-sweet-sort-of-weird-texture kind of ice cream. Back when that was all there was, it was good enough. It was maybe even kind of great.

But ohhhhhhhhhh, how wrong I was, my friends.

It turns out there is so much more to no-churn ice cream life than we thought there was!! 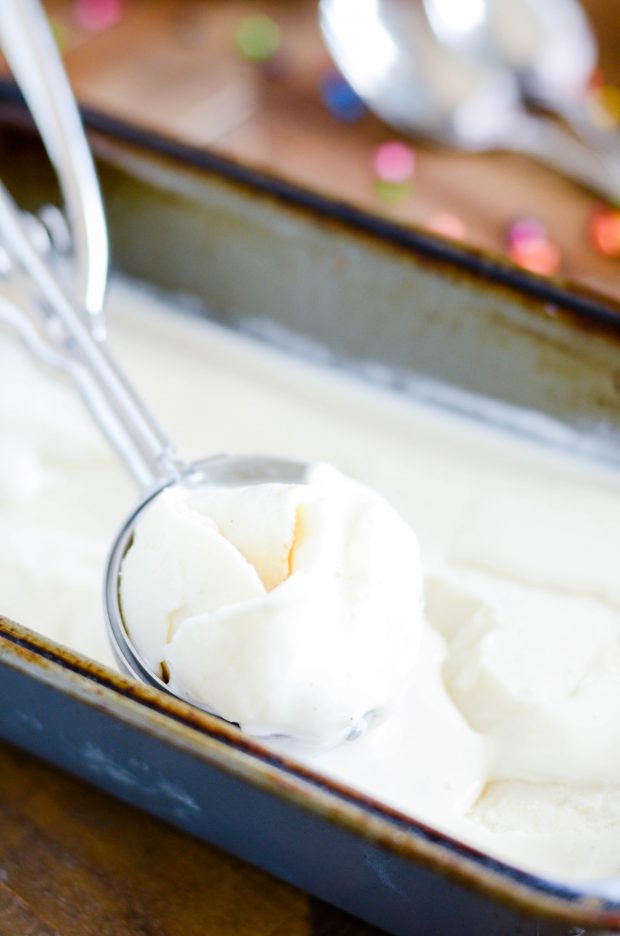 Okay, so what were the problems with the old recipe? Primarily two things: 1) it was WAY too sweet. Especially if you used the Cool Whip shortcut (guilty). And 2) it had sort of a weird texture as it melted. Because it never really melted down to a liquid… it was more of a semi-solid. Which was weird.

How do we fix that?

Well, for starters, we need an ingredient that balances out the sweet from the sweetened condensed milk. And secondly, we probably don't need to add another thick ingredient like whipped cream!

The answer was there the whole time! So unassuming and subtle, just sitting there in the refrigerator waiting for us to notice. Waiting for us to realize that when sour cream mixes with sweetened condense milk and freezes…. BAM. Ice cream! And not just any ice cream– good ice cream. 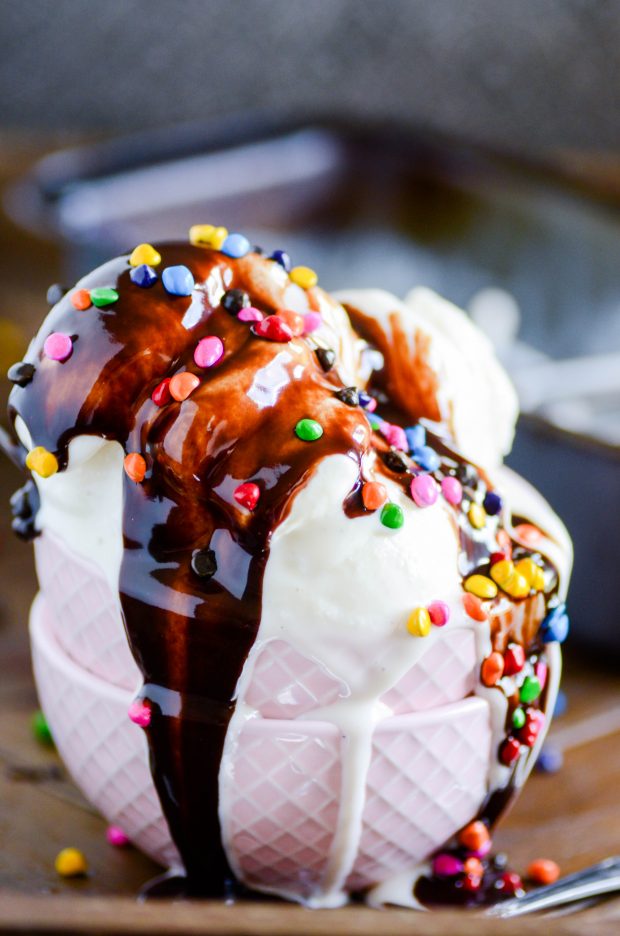 Want to know what else is cool about this recipe?? You can actually substitute nonfat Greek yogurt in place of the sour cream. YES!!!! Isn't that amazing?

Be forewarned, it does get ever-so-slightly (and I do mean only slightly) icier than the version with sour cream. But still– I think that's totally worth it for an easy homemade frozen yogurt that does actually have some nutritionally redeeming qualities, amiright?!

So, what do you think? Is anyone else as excited about this revolutionary recipe as I am?? Because I'm literally still flipping out over this. I want to go make eleventy bajillion flavors of no churn right now. Imagine the possibilities now that easy homemade ice cream doesn't suck! WOOT!

Whisk together the sweetened condensed milk and the sour cream.

Pour into a sealed container and freeze for several hours until solid.