Three different football cupcakes that are so easy to make and perfect for a party or tailgating! 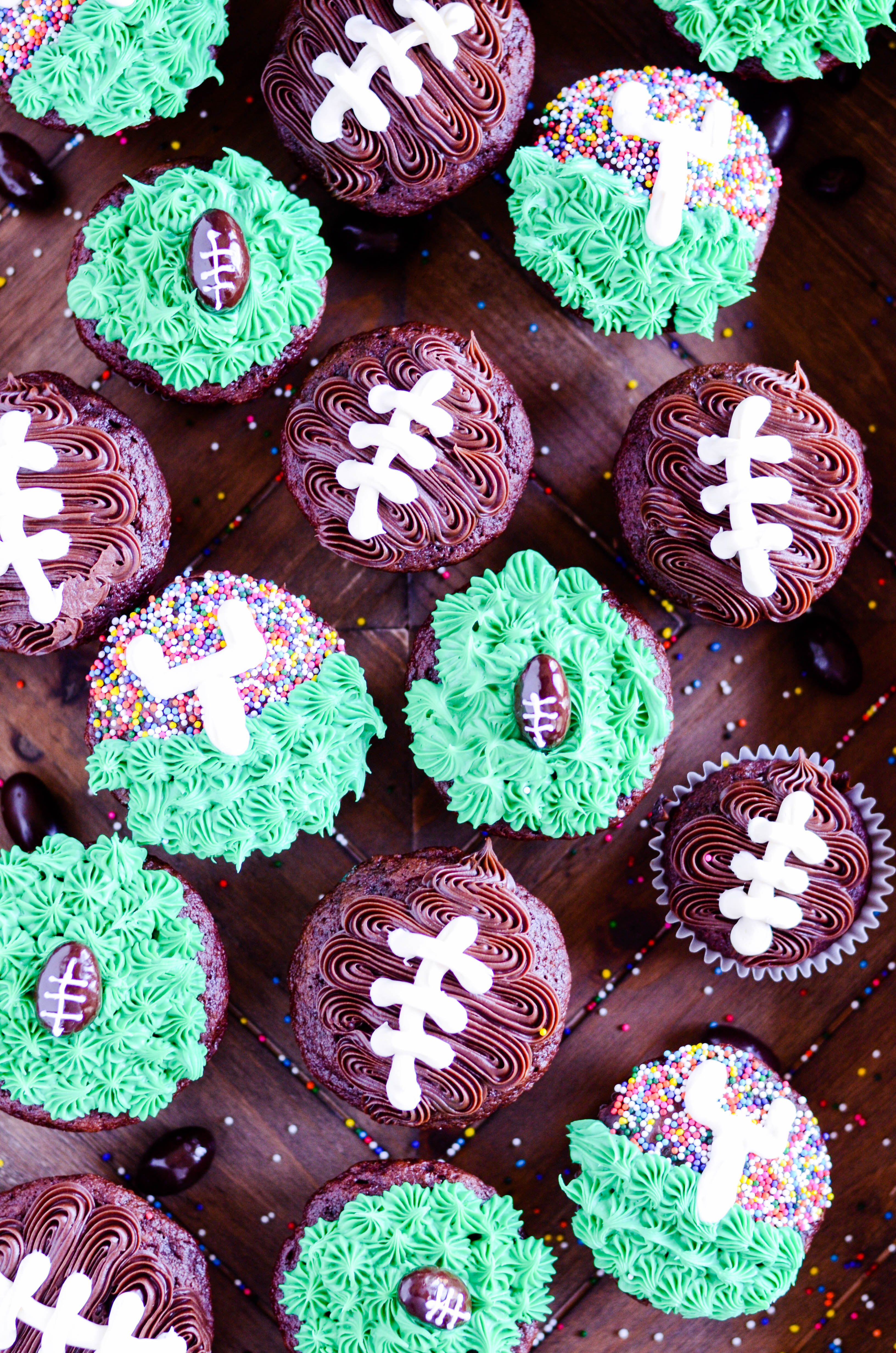 I've been really into easy cupcakes lately. In fact, I have three easy HALLOWEEN cupcakes coming your way soon! But for now, let's make cupcakes for football season. Do you like football? I used to. Until I got married ????.

I think I'm loving cupcakes right now because they are just SO rewarding to make. With relatively little effort, cute cupcakes can be a total statement piece for events and get-togethers.

And seriously, they don't even have to be good, if you know what I mean. You don't have to be a professional cake decorator or a whiz with a piping tip or anything like that! You could do a haphazard piping job, and these cupcakes will still basically turn out right. 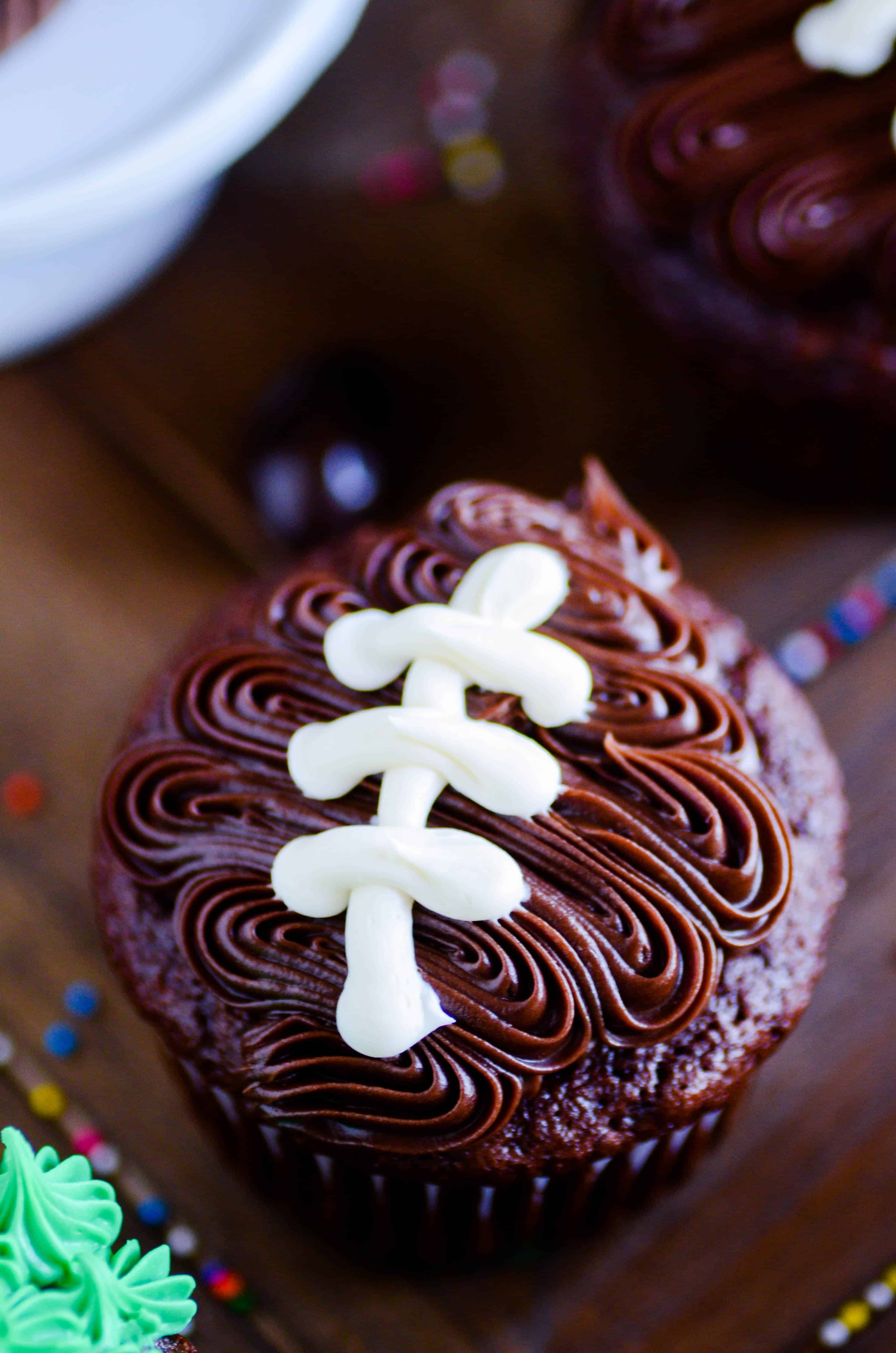 These simple chocolate frosted footballs are my favorite of the three. Use a Wilton Open Star Tip to squigle a football shape on top of the cupcake, and then use a round tip to pipe on the seams– it's just 4 straight lines, you can do that! 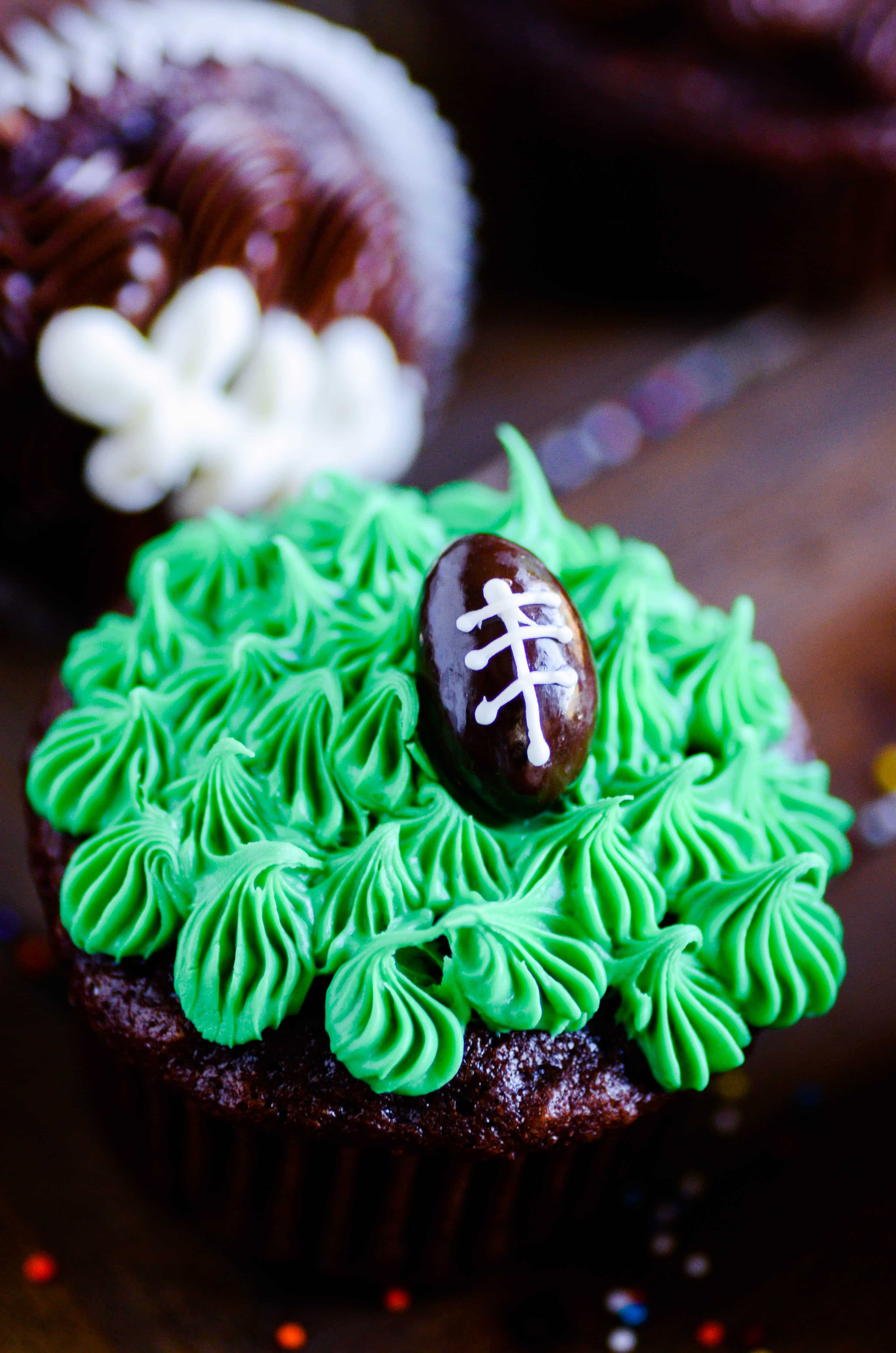 Normally I would use Wilton's Grass Tip for the green frosting. But I had some sort of tip malfunction today and had to switch things up to use the open star tip (see? you can't mess these up!). I just did a sloppy pipe job with the green frosting and added a chocolate covered almost for the football.

I used Wilton's smallest round tip to pipe the football seams on the almond. Easy. 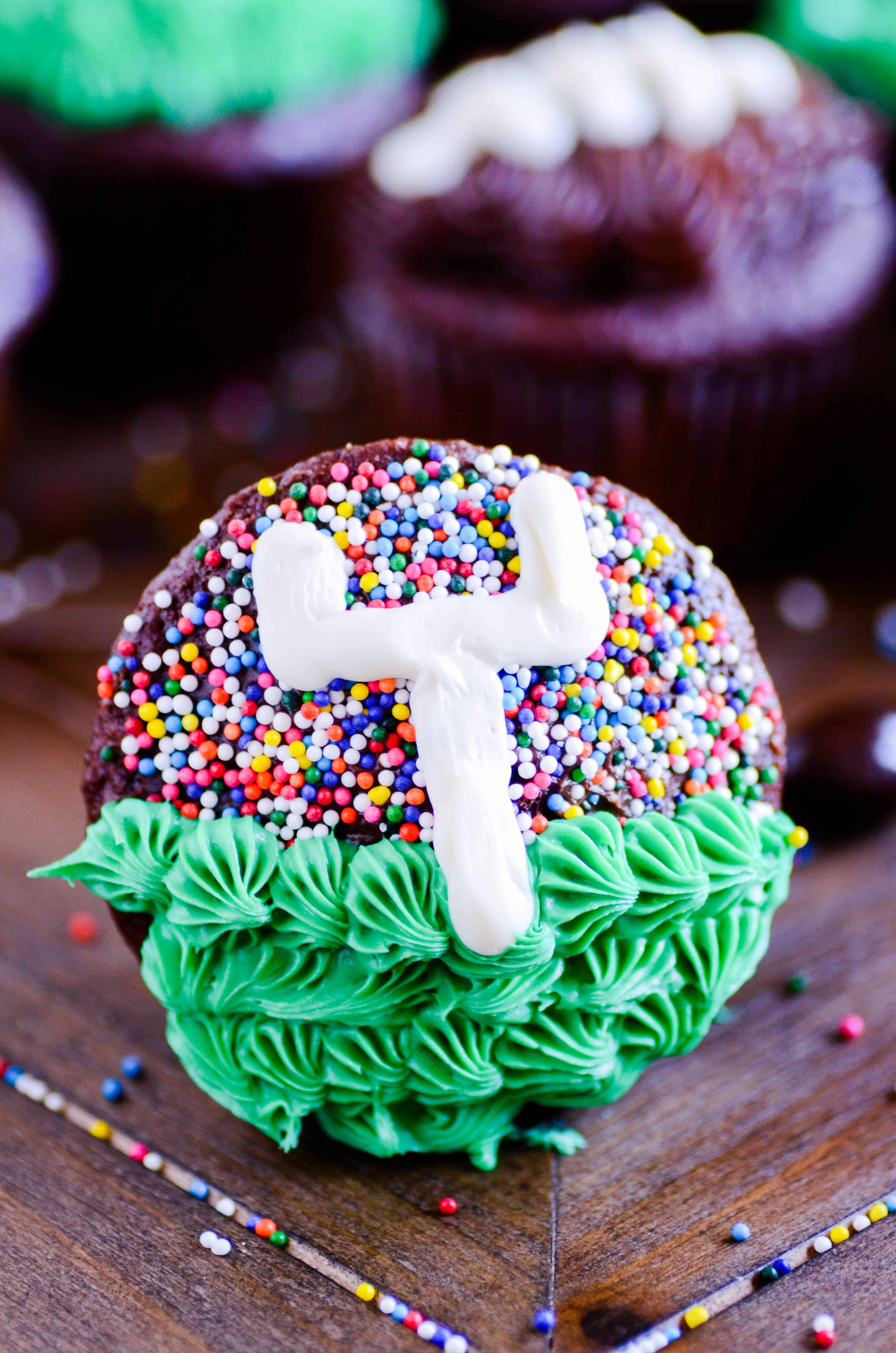 Again, I would have preferred to use the Grass Tip on this one, but rolling with the punches, I used the open star tip for the grass again. It's fine.

And how cute is this simple idea? The rainbow nonpareils are the fans in the stands behind the goal post (which is just piped on with a round tip). Too fun! 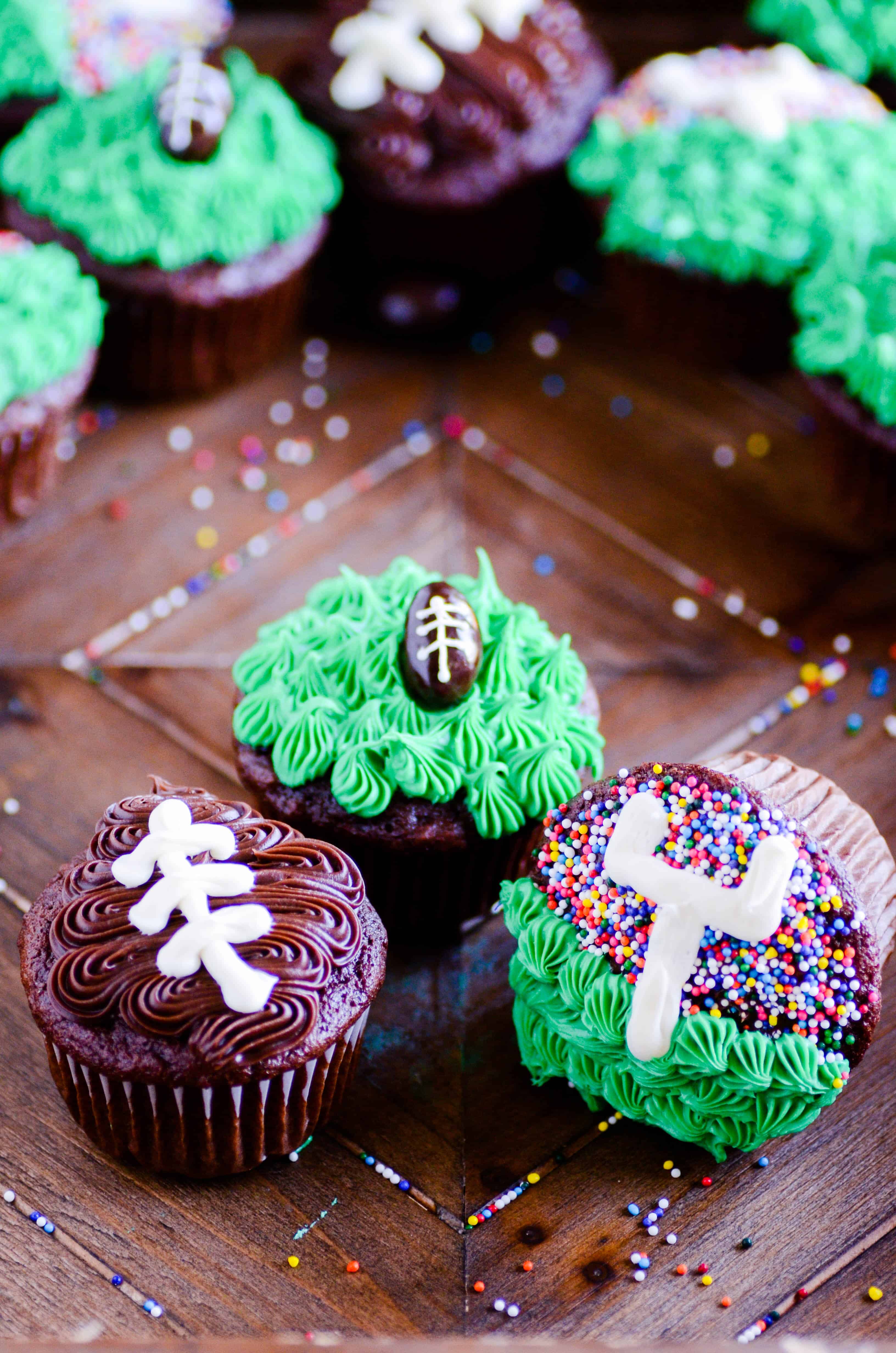 I'm putting my favorite chocolate cupcake and chocolate frosting recipe below. If you'd rather make a vanilla cupcake, click here for my favorite recipe.

And FYI– I just used Pillsbury Vibrant Vanilla frosting in green (bought at Target) for the grass. It's the perfect color. But feel free to color your own buttercream if you feel like being an overachiever ????.