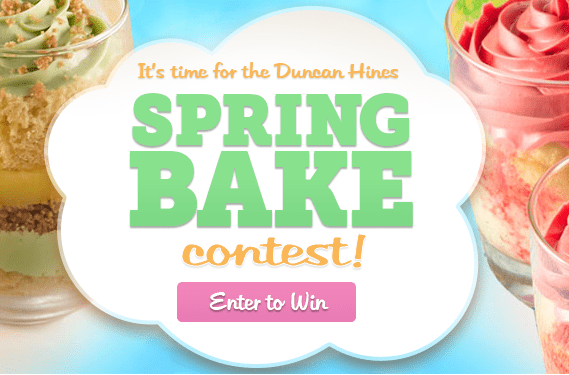 Remember that trip I told you about? To Parsippany, NJ to visit the Duncan Hines Test Kitchen with me and 10 other bloggers?!

Good news! Here’s your second chance to win!! And the best part is…. it’s a BAKE CONTEST! How fun is that??

Simply visit Duncan Hines for more information and to enter the contest. Hope to see you there! 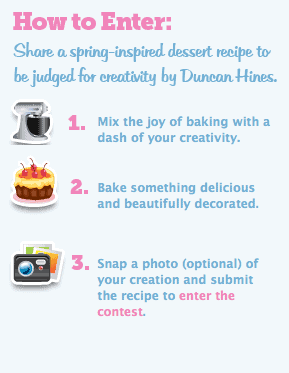 Ten (10) Grand Prizes: Each winner will receive the following: a 3-day/2-night trip for the winner to Parsippany, New Jersey on 09/20/13 – 09/22/13 (travel dates subject to change by Sponsor, in Sponsor’s sole discretion), including a baking class with Duncan Hines chefs (“Event”), round-trip coach-class air transportation for winner from a major airport(s) near winner’s residence to a major airport near Parsippany, New Jersey (airports selected by Sponsor), standard hotel accommodations for winner (single room/double occupancy; hotel location and other accommodation details determined by Sponsor), ground transportation to/from airport and hotel and hotel and Event. Approximate Retail Value (“ARV”) of Each Grand Prize: $1,200. Total ARV of all prizes $12,000. Actual value of trip prize depends upon the city of departure, time of travel, any airfare fluctuations and on current market conditions at time of prize fulfillment, and any difference between the stated ARV and the actual value if any, will not be awarded. Tickets awarded as part of a prize are subject to the terms and conditions stated on such tickets. See Travel Restrictions below.

All taxes and any other costs not specifically stated within these Official Rules are the sole responsibility of the winners. Prizes may not be transferred, substituted or redeemed for cash, except at the Sponsor’s sole discretion. Sponsor reserves the right to substitute a prize of equal or greater value if advertised prize is unavailable at the time the prize is awarded. All prizes claimed will be awarded. Limit one prize per person/Facebook ID.